On the cliffs in West Cumbria

Cumbria is famous as the county of the English Lake District but it has more to offer than mountain walks. I don’t agree with Alfred Wainwright who said he could not see the point of walking round a mountain when you could climb to the top of it. There are many beautiful walks in the valleys and round the lakes which my wife (and my knees) much prefer over climbing and descending even if they don’t offer much scope for making radio contacts. Less well known, but just as spectacular, are parts of the coastline. One of our favourite outings is to park in the village of Sandwith and go for a walk along the cliffs. This is where we went last Sunday.

The map of the walk shows the path that was tracked on Google Maps APRS, with some additions by me where my position was not tracked. 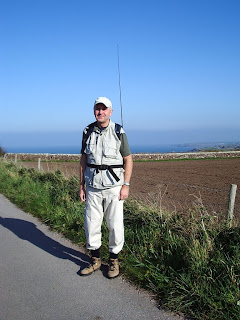 I was using my VX-8GR with the 5/8 telescopic whip in my rucksack, as shown in the picture on the right. I operate pedestrian portable like this when I don’t expect to encounter too many people who will give me strange looks or think I am a dork. The radio sits in a little mesh pocket on the side of the rucksack which was probably meant to carry a water bottle. The antenna is supported by pushing it through a string loop attached to one of the zips of the main pocket of the rucksack. It is quite stable and does not flex the spring or the mounting at all.

I don’t know what the SWR is like. Possibly it isn’t that good as the radio does not have me holding it to provide a ground plane. Perhaps I should try clipping a 19 inch “tail” to the outer ring of the BNC connector as a counterpoise? But even without it, it worked well. Most of my position beacons were received by MM1BHO across the water in Scotland so I was able to see the track after the walk. I also received some interesting APRS DX, of which more later.

But back to the walk. The weather was glorious, as you can see from the pictures. The temperature was around 20 degrees Celsius with only a slight breeze. The view from the cliffs was spectacular and always reminds me a bit of Cornwall. To think that people pay money to come on holiday to places like this! 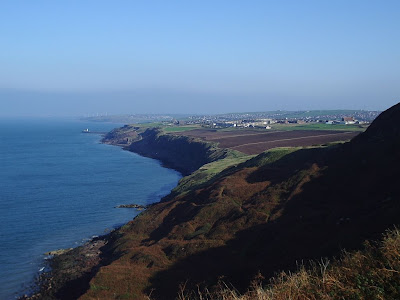 We walked for about an hour along the cliffs, stopping now and again to watch some birds through binoculars or just take in the view. This is an important area for wildlife and the Royal Society for the Protection of Birds (RSPB) has set up several places where you can watch them with safety on the edge of the cliffs.

You can walk right along these cliffs as far as St. Bees, where there are people and cafes and ice cream kiosks. But we usually stop at Fleswick Bay, a beach backed by the high cliffs that is always quiet and secluded even in the height of the season because it isn’t possible to reach it by car, it can only be accessed by footpaths. We call it our private beach because we often have it to ourselves. 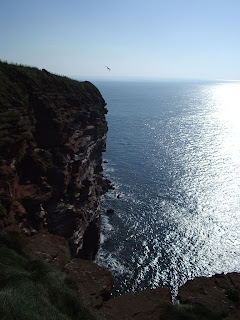 This Sunday we didn’t go down to the beach because we saw from the clifftops that the tide was in and the sea was right up to the foot of the cliffs. So we had our picnic lunch in one of the RSPB birdwatching areas instead. I made a couple of FM contacts using the VX-8GR, including one with another portable station on a 2,500ft mountain top in Wales. Then we started the walk back.

On the way back I heard the VX-8GR braaping away constantly such as I hadn’t heard since we were in Prague. On my return home I scrolled through the station list and observed that for a couple of minutes between 12:28 and 12:30 UTC I had received beacons from several DX stations including F4EQD-1 and OZ2DXE-2. These beacons had actually been digipeated by a station in south west England but that was still an amazing distance to receive signals on a VHF handheld, even if I didn’t hear them direct.

The glorious weather had also produced fantastic tropospheric propagation which was enjoyed by people in most parts of Europe. I wished I had climbed to the top of a mountain as I would certainly have heard more there than I did down on the west coast and perhaps have worked some real handheld VHF DX. But you can’t predict propagation and it was still a wonderful day’s walk.