One of the things I had intended to do this year was install the external frequency reference module in my Elecraft K3 in order to get the best possible frequency accuracy for digital modes. To this end I had ordered an Off-Air Frequency Standard (OAFS) kit from Spectrum Communications so as to avoid wearing out my rubidium frequency standard. I had completed populating the OAFS board a couple of weeks before I ended up in hospital. So I thought I would try to see if it worked, as that would simply involve connecting up a speaker, ferrite rod antenna and power supply. 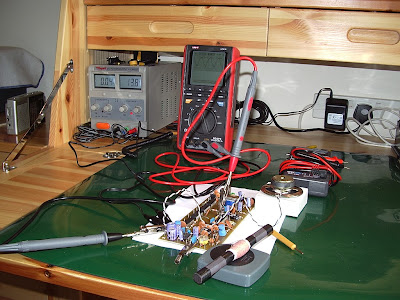 It began to look as if the predictions of the couple of people who commented or emailed when I first posted about the OAFS were going to be right. I could hear BBC Radio 4 long wave in the loudspeaker but it was very weak, presumably (as I had been advised) due to North Cumbria being a poor location to receive the transmission. When I checked the frequency of the phase locked loop it remained steadfastly on 216.4kHz regardless of the setting of the trimpot.

The instructions supplied with the kit suggested that it might be necessary to change a resistor value if the loop will not lock on to 198kHz so I wrote to Tony Nailer at Spectrum to see if he had a suggestion. Unfortunately his reply was that if the loop will not change frequency with the pot there must be a solder bridge or other assembly error. I checked my soldering as best I could and re-did any joints that looked suspect but the way my eyes are now any sort of cross checking between the schematic and the circuit board to look for errors is impossible.

I haven’t really figured out what is wrong with my eyes but it is as if they no longer have the ability to vary focus. I can only see clearly what is at the exact focal point of whatever spectacles I am wearing. When something is out of focus my head swims and I have to close my eyes for a few minutes to steady it again. So any sort of constructional work now is well-nigh impossible.

Tony offered to get the OAFS working for me for a fee if I sent it to him, but at this point I think it would be a waste of money. I can’t see myself installing the frequency reference boards in my K3 now even if I still had the same interest in doing so. So I think the OAFS is destined for the G4ILO junkbox.