19 January 2016 | by Larry W2LJ  |  Share |  Tweet |  Leave a Comment (1)
Of course, W2LJ picks one of the coldest, windiest days of the Winter season (so far) to do an NPOTA activation. Of course!  But it was a blast (of cold air) nonetheless - even if I still haven't warmed up some hours later.

We got a light dusting of snow yesterday, which was a prelude to today. It was sunny and clear, but the winds were blustery and our high temperature for the day was reached last night at Midnight. Ever since then, the temperatures have been dropping. As I type this, it's currently 16F (-9C) outside. While I activated NPOTA, it was 24F (-4C). 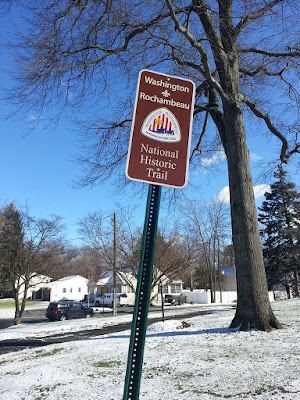 I headed out at 11:40 AM to the Washington-Rochambeau National Historical Trail TR23, which we know as Old Raritan Road in Scotch Plains, NJ.  I wanted to set up at the historic  Frazee House, but that part of Old Raritan Road is currently blocked off for repaving.  I settled for operating at the entrance to the Ashbrook Country Club golf course in steady.  It's right on the trail, as you can see from the photo above. At the entrance to the golf course is the remnants of a cannon that was used in the Battle of Short Hills in June 1777, as seen in the photo below. 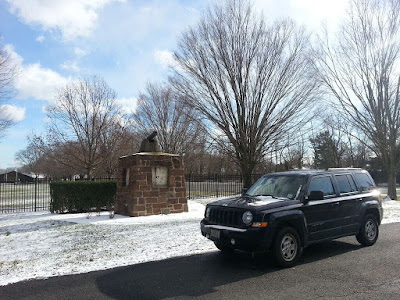 Set up was easy, I've done it so many times at lunchtime at work that I could do it in my sleep. The cold made things a tad more difficult, though; but I was ready to get on the air at Noon (1700 UTC), just as I had planned.

I started out on 20 Meters, using the Buddistick.  It really helps to bring a cell phone along on these kind of outings. Having a smart phone enabled me to go onto the DX Summit Website and self spot. Within a few seconds of sending the spot, I was busy handling QSOs.  There was never a really deep pileup, but there weren't many lulls either.  When a lull hit, I used the opportunity to either change bands, or turn on the car to warm it up a bit.  As an experienced QRPer, and being used to working weak signals, you get into the mindset to avoid as much background noise as possible. While I was operating, the engine was off. I would rather be a bit cold than miss another QRPer because of engine noise.

When the Jeep interior cooled down as to start becoming uncomfortable (I'm ALL about comfort!), I took the opportunity to warm the interior up, and to switch from the Buddistick to the 40 Meter Hamstick.  I get a better match with the Hamstick, only 1.3:1, which is lower that the 1.8:1 that I get with the Buddistick.  I still have to work on finding the ideal combination of arms and whip length for 40 Meters on the Buddistick. 40 Meters was as productive as 20 Meters.  Most of the QSOs were made on those two bands, although 17 Meters was not a slouch by any means. 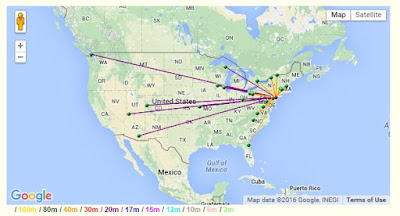 I called it a day at 3:00 PM (2000 UTC) just as I had planned.  In the end, I made 88 QSOs, which is actually way better that any Bumblebee or Skeeter outing that I have had, and is not bad for 5 Watts to less than full sized antennas. My best DX was California, Arizona, Puerto Rico and two stations from Belgium.  I worked a few of you readers that I know from here, and I thank you heartily for those Qs. I also worked my best friend and Ham Radio mentor, Bob W3BBO. I worked QRP notables Steve WG0AT, Guy N7UN, fellow QRP Fox hunter Chris KQ2RP, and I also worked Kay Craigie N3KN, outgoing President of the ARRL.

But the best QSO of the day was when I worked Dave KD2FSI, who I logged for at Jockey Hollow on Saturday.  This was perhaps Dave's second or third CW QSO, maybe?  It was a blast to be there and to hear his fist on the air!

All the QSOs have been uploaded to LoTW. I can't wait to activate another NPOTA entity. The bug has really bit now. As the seasons change, and the weather gets warmer, the strategy will change from antennas mounted on the Jeep, to perhaps wires tossed in the trees.  The best is definitely yet to come!  Thank you Sean KX9X and the ARRL for sponsoring this great program!


Larry Makoski, W2LJ, is a regular contributor to AmateurRadio.com and writes from New Jersey, USA. Contact him at [email protected].

One Response to “NPOTA – Brrrrrrrrr!”