In the last few days several people have posted in their blogs or in forums that conditions on 10m have been great. Either I have been listening at the wrong times or this QTH is as bad on the higher HF bands as it is on VHF. When I have tuned across the 10m band I have found only one or two signals strong enough to be heard above the S4 noise level I now have on this band and none loud enough to work.

It’s probably my QTH. Last year when Olga was away in Ukraine I operated from the car with my QRP K2 and an MP-1 antenna on a mag mount and from just a few miles away but overlooking the coast I worked DX on 15 and 17m that I had never heard from home. Unfortunately going mobile is no longer an option as I am not allowed to drive due to my illness. 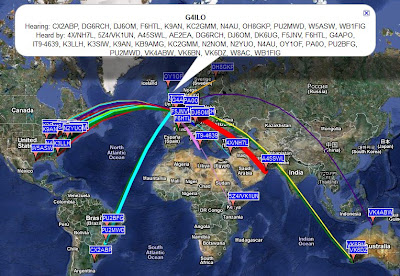 Something must be working right though. Most of the day I have been running WSPR on 10m with 5 watts to the dipole and my signal was spotted on 5 continents. It’s good, but it isn’t the same as having an actual conversation. You can see why my interest these days is turning more towards things like EchoLink.

2 Responses to “Nothing but whispers”