Three perhaps noteworthy amateur radio activities occurred recently around K8GU: 1. During the course of some HVAC upgrades, I was able to get two holes core drilled through the foundation to bring coax and control cables into the house; 2. I operated in the NAQP August CW contest; 3. Evan and I went to the Berryville, VA, hamfest. 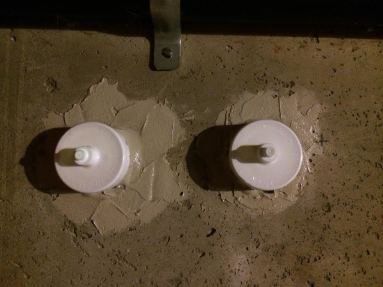 These two ports exit the basement into a crawl space where I will ground the cables before they enter the house.  I still need to get some hydraulic cement or other quick-setting patch mortar to clean up the drill crater on the outside.  Total cost: $5 in materials and a large pizza for the crew. 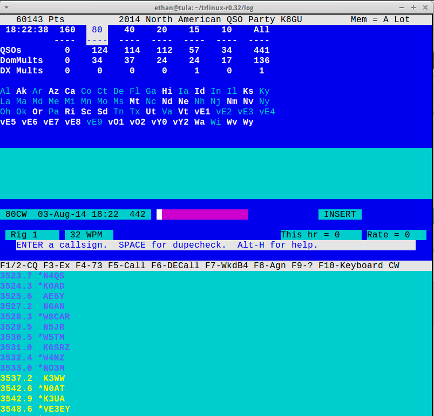 Screenshot above shows TRLinux after the end of the contest (obviously it was today, not last night).  TRLinux performed flawlessly again with the YCCC SO2R+ box driving the KK1L band-decoder and 6×2 switch.  I operated for about five hours (probably a little more, and definitely more if I used the NAQP 30-minute time-off rule to calculate it).  I got up after my first operating sitting at the beginning of the contest and left the shack.  As I exited the door, I was hit with the smell of hot electronics.  You know the smell: like when you just let the smoke out of a transistor.  I walked over to the antenna switch matrix where I was using a triplexer to split the hexagonal beam to both radios.  It was warm to the touch.  It seems to have continued to function, but I’ll have to disassemble it at some point to see if any irreversible damage was done.

The August NAQPs are always fun for us out East because there is the ever-present opportunity for sporadic-E throughout the contest, giving us a chance to work nearby states, which can really drive up the multiplier (and QSO, depending on the direction of the opening) total.  Of course, this is the real boon of having a second radio: you can call CQ on your most productive band while looking for openings on the others.  I came down after supper with the family to “work 40 meters before it goes long” and ended up with blistering 10- and 15-meter runs into the Midwest and South.  Since Evan and I were planning to go to the hamfest and I don’t yet have a 160-meter antenna at the “new” QTH, I pulled the plug at midnight local time (0400).  Not sure 40 meters was even getting long at that point.  At any rate, it was wonderful to say “hi” to so many old friends from MRRC, MWA, SMC, PVRC, and beyond!

A final comment:  You can really tell how much better one radio is than another when you have them both side-by-side on your desk.  This was quite apparent when I had the K3 and the TS-930S and it is also apparent with the K3 and the K2.  The K2 is a wonderful radio and fun to operate, especially in the field, but it’s not the K3 as far as fit and finish, among other things.  No, I’m not buying another K3 anytime soon.  The K2 is quite enough for the second radio.

I’ve always heard that the Berryville, VA, hamfest had a good boneyard/fleamarket/swapmeet but I’ve never managed to attend.  I resolved to attend this year and was pleasantly surprised.  Evan came along for the ham-and-egg breakfast, which was good but he rejected the ham after only consuming about 1/3 of it, and a trip to the playground at the school across the road.  This is still a “real” hamfest like the ones I remember going to in the early 1990s before eBay and online trading really took the wind out of swapmeets.  There were plenty of rigs spanning the spectrum of boatanchor to relatively modern, HF and VHF/UHF.  There were lots of amplifiers, as well, (and a small quantity of CB junk; Texas Star, anyone?)  There were also lots of antennas, and even some Rohn 25.  The computer and cell phone accessory dealers were mercifully few and there were lots of tables of parts, bits and pieces.  This is a ham’s hamfest and I’ll be returning.  I picked up a bunch of Cinch-Jones plugs and sockets for my new cable ingress, plus some SMA connectors and flexible coax jumpers.  Plus, I ran into a few friends, although not the ones I expected to see!