The success of my project to make an FM version of G3XBM’s Fredbox was always going to depend on the receiver. The Fredbox receiver is a simple three transistor super-regenerative design. This is the only practical way to make a receiver small enough to fit in a hand-held case. It is also the only cost-effective way to do it, because making a conventional double-conversion receiver with crystal control just wouldn’t be worth it for such a project.

What I didn’t know were a) would the super-regenerative receiver work with FM signals (the original Fredbox was designed for AM) and b) would it be sufficiently stable to stay on frequency without the benefit of crystal control? However, what I didn’t give too much thought to was the possibility that I wouldn’t be able to get it to work at all.

Because this is a VHF circuit I didn’t think I could try it out on the breadboard so I made it up directly on to Veroboard. The layout is pretty similar to Roger’s original layout from what I can tell from the pictures on his website, although I think he made an etched circuit board, something I’m not able to do.

I drew up the layout using a bitmap editor. This shows the components from the top view. The large outline components are the Toko S18 inductors, and the red lines are wire links below the board connecting the ground traces. The schematic for the receiver part of the Fredbox is shown below. As with the Nano-40 I used an MPS13 in the audio stage in the hope of getting a bit more audio gain. 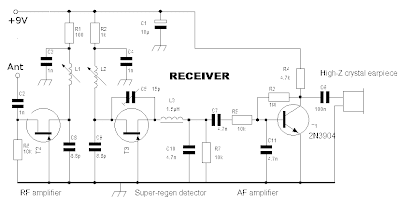 I applied power and expected to hear a hissing sound in the earpiece which stops when a signal is tuned in. However I heard nothing at all. The audio stage appears to be working, as I can hear a faint buzz if I touch something metal to the input.

Alan, VK2ZAY had a lot of trouble getting the receiver to work as well, and he is an experienced constructor who knows what he is doing. I suppose this should have warned me off trying this project. Alan replaced the axial choke for L3 with half a dozen turns of wire on a ferrite bead, and I did the same, but to no avail. I also substituted a variable trimpot for R2 which in many other super-regenerative receiver designs is a variable regeneration control. But no matter what the setting of the pot I could not get any regeneration to occur at all.

I think my FM Fredbox is about to become yet another abandoned project. 🙁