Since I seem to have engaged in nostalgia a bit, with the IC-740 post here’s another one! As I was driving back to Cheltenham with Mum this afternoon, talking about her father, Harold Iles, my Grandpa (who incidentally features in Laurie Lee’s novel, ‘Cider With Rosie’) . Harold was a great experimenter and really should have been a radio amateur. He was building radio sets when this was very cool stuff. Mum was telling me that he’d helped her build her own valve receiver. Certainly in the 1970s, he helped me build my own crystal set, which I still have! When he died in 1979, he was kind enough to leave me a little money.

By 1979, I was already very interested in amateur radio and had been shortwave listening for sometime, using a Nordmende Globetrotter broadcast bands radio which I had acquired when a dear, if distant, uncle had passed on. The Globetrotter was excellent, although the tuning was not so precise and it was hard to know exactly where you were listening – which could be tricky when sending off SWL reports!

I think I really wanted to buy myself a Trio (not Kenwood in those days) R1000, but could not really afford it and I was not working at the time, so the affordable option, which would bring me SSB reception for the amateur bands was the Sony ICF-2001D. 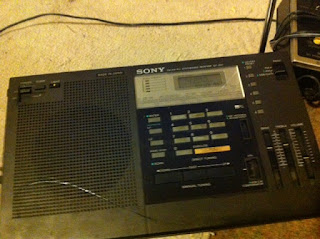 I’ve a feeling that the ICF-2001 was £199, but I’m not sure. I remember buying it from a shop on the High Street in Cheltenham, ‘Ray Electrical’ (Robber Ray, as my Dad, perhaps unkindly, referred to him!), using Grandpa’s gift.

Having digital readout and SSB was amazing! Being 1979/1980, solar conditions were good and I was able to hear lots of DX, particularly on 28MHz. With the receiver in my bedroom using the whip antenna, I listened to the USA working into the Indian Ocean (VQ9) and much more DX! I was captivated and knew that this was the hobby for me.

The ICF-2001 served as a great introduction to amateur radio for me, and I entered the SWL ladder in ‘Short Wave Magazine’ for a couple of  years. By early 1983, I had taken and passed the Radio Amateurs Examination (then a City and Guilds exam) and obtained my first callsign, G6TTU. The ICF2001 formed part of my first station, being used on the Mode A satellites (145MHz up and 29MHz down) enabling me to work such DX, to a VHF only call, at least, as OX3WS in Greenland and TU2IT in the Ivory Coast.

Of course, not long after, I aimed for my Class A licence, passing the 12 wpm morse test, and by then was working, and had purchased the IC-740 so the need for the ICF2001 was lessened.

However, my Dad was always interested in short wave and I made the rig available to him. When I was off on a DXpedition somewhere, such as D68C in the Comoros, or ZF1VX in the Caymans, he would listen out for me, which was a nice feeling.

Wind the clock forward to this afternoon. I wondered if the ICF2001, which was still in Dad’s old study, would still work (not having been used since Dad’s death almost 3 years ago), so I grabbed it and brought it home.

I popped a couple of AA batteries into the ‘computer’ battery box, connected a power supply and fired it up! IT WORKS!

Fun to listen around, just on the internal antenna – just for old times’ sake, but it’s nice to know it still works, and I’m sure I can still coax some DX out of it!

Thanks, Grandpa, for getting me started…