I phoned up Radioworld this afternoon to ask why I hadn’t received the 2m 5/8 vertical I ordered a week ago. After looking up the order the girl told me that the stock hadn’t come in yet. “We sent you an email yesterday” she said. That was presumably in response to my shirty enquiry yesterday. I checked through my Spam folder and I didn’t receive any email from Radioworld. I mentioned twice that I had received an email saying the item was despatched on the day I ordered it, but there wasn’t the slightest hint of an apology, just a repetition of the fact that the stock hadn’t come in yet. Radioworld goes on my list of dealers to avoid. 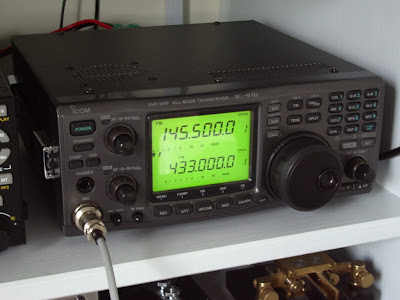 LAM Communications by contrast has been a pleasure to deal with. After failing to win any VHF multimodes on eBay I decided that rather than gamble my money on the stock markets or leave it in the back at an almost zero rate of interest I might as well buy any radio gear I want, so I treated myself to an Icom IC-901H. LAM had a used one for sale so I phoned up to ask about it. I was told it was in really nice condition but when I asked its age the salesman (Dave) didn’t know, so he promised to phone Icom UK to find out when the guarantee ran out and call me back.

This he did after a few hours. He was a bit apologetic, saying that it was made in 2003 so there was “a bit of age behind it” and in view of that he would knock an extra £50 off the price and throw in carriage for free. I decided to go for it and he then warned me that the FedEx courier had already called so it wouldn’t go out until the following day. Fine, so it would arrive today. It did, well-packed (the Icom box was bubble wrapped and inside a larger box) and was exactly as described. Better, in fact, I can’t see a single mark on it. I am well pleased, and would be more than happy to buy from LAM Communications again.

The worst offenders in my experience for service have been Waters and Stanton. I forget the details of all the times I had to hassle them to send things I ordered, such as when I bought a rig advertised as with a free desk mic in RadCom and they didn’t send the free desk mic. A classic example of dealing with W&S was when I ordered the MFJ magnetic loop a few years ago. I didn’t receive any email or acknowledgement and no money was taken from my account so I decided that the online order hadn’t gone through. I started to have second thoughts about needing the antenna so I decided to forget about it, which I did until one day, more than three months later, without any prior warning, a courier knocked at the door with a very large box…