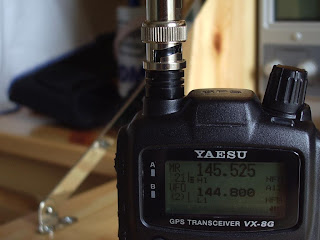 As regular readers may recall, I have a pathological hatred of SMA connectors when used as antenna connectors for hand-held radios, which has become even more entrenched since I had the centre pin of the TH-F7E stock antenna break off in the adapter I use for testing such antennas on my antenna analyzer. I now have an SMA to BNC adapter permanently installed on my VX-8GR. The picture on the right shows my latest adapter which is anodized black and looks like an integral part of the radio. The previous one I used was gold plated with a knurled body and whilst it worked perfectly and provided a robust fitting for the BNC antennas it looked a bit ugly.

If you never change the antenna on your HT then one of these adapters isn’t necessary, but SMA connectors were never designed for multiple connections and disconnections (in one email group I saw someone state they were rated for 100 disconnections) so if you want to change between a short stubby antenna for inconspicuous local use and one with more gain the BNC adapter is the way to go.

All of my BNC whips are 2m antennas, which is fine most of the time as almost all my operating is done on 2m, but there are rare occasions when I might want to use 70cm and removing the BNC adapter in order to attach the stock antenna kind of defeats the object of it. So I ordered from eBay a Nagoya NA-701 antenna which is a short dual band whip similar in size to the ones supplied with amateur dual band handhelds but with a BNC connector.

I tried it out on my antenna analyzer and it showed a nice sharp SWR curve with the minimum around 147MHz. It could be better, but it’s closer than some stock antennas I’ve tested. I couldn’t check it on 70cm as my antenna analyzer doesn’t go up that high.

I need to devise way to make comparative tests of all these HT antennas, because asking for signal reports or seeing if you can hit a repeater is a pretty crude measure of performance that won’t reveal small differences. This little antenna doesn’t perform as well as a six inch monoband helical on 2m, nor a quarter wave telescopic, but that is only to be expected. The beauty of the BNC adapter is that if you need a gain antenna you can easily whack on something like my 5/8 wave Black Whip, which you certainly couldn’t use with a standard SMA connector.