Another VE7 is almost ready to deploy on 630m.

There must be something special in the water in B.C. as it is certainly the present hotbed of 630m activity in Canada!

Markus, VE7CA, in North Vancouver, has been busy building a transmitter and a matching VFO, following the plans of GW3UEP. There must now be dozens and dozens of these robust little transmitters in operation around the world as it is easily reproducible (in various forms) and performs well. See the sidebar links for more details.

As well, Markus has been building the necessary auxiliary gear needed to tune up and resonate his antenna system. His recently constructed variometer and scopematch are shown below. 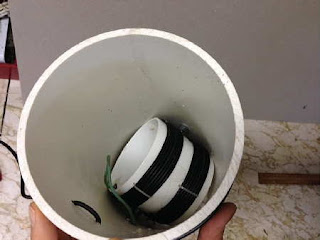 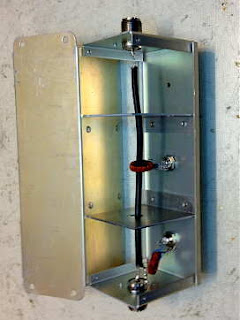 Some might argue of the necessity for a scopematch, but once you've tried it, you wonder how you could ever live without it ... the scopematch makes tuning the antenna system a very simple step and is an extremely valuable addition to the LF/MF shack.

Markus plans on using his main low band antenna, a large ladder-line fed horizontal loop, as a top-loaded vertical, while resonating the system with base-loading. A homebrew relay-control box at the antenna, takes care of switching between MF and HF.

I had a nice CW QSO today on 476.0 kHz with Toby, VE7CNF. He has made some significant changes at his station and his 20dB over S9 signal reflects his hard work. As well as rebuilding his top-loaded vertical, he has made modifications to his PA. Using a pair of IRFP4227 switching FETs in push-pull, his amplifier now brings him to the maximum EIRP limit of 5W. See a description of Toby's interesting station on his website here. When not on CW, Toby can be heard WSPR'ing, most evenings on 630m.

With the soon-to-arrive VE7CA, we almost have enough activity here in the Vancouver region, for a weekly 630m net or at least a good chance of a random 'CQ' garnering a response. How great it would be to have a VE6 or VE5 to join-in ... what say fellas!
Steve McDonald, VE7SL, is a regular contributor to AmateurRadio.com and writes from British Columbia, Canada. Contact him at [email protected].