There is nothing like some new toys to cheer you up when things get a bit boring! The G4ILO shack received two new arrivals this morning. Actually there was a third, non-radio addition that came yesterday as well, but that will have to wait for another posting. 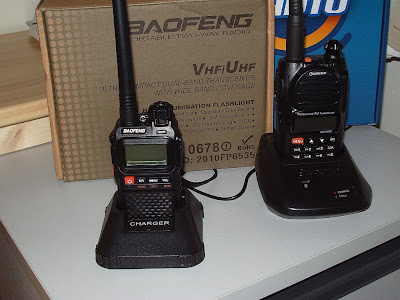 The arrivals are two new handies – one a Baofeng UV-3R+ VHF/UHF dual band transceiver (note the plus,) the other a Wouxun KG699E low band VHF transceiver for 4 metres. My original UV-3R has found a new home, whilst the Taiwanese “professional” radio I got for 4 metres is just a rubbish radio.

I haven’t had time to get to know the new radios. The Wouxun in particular is not intuitive and will require some intensive study of the manual. The Baofeng is functionally identical to the UV-3R Mark II but the build quality is much superior – on a par with the Wouxun and favourably comparable to the ham radio brands like Yaesu.

A major plus of the UV-3R+ is that you now get a professional grade drop-in charger. Besides a more rugged-feeling case it also has a metal belt clip – a big improvement over the flimsy plastic one that came with the earlier model. I believe that both radios use Kenwood specification accessories. This will be useful, if true, as I have two Kenwood radios as well. One of the first things I will have to do is find a wiring diagram for the programming cable because the one I made for the UV-3R Mk I has a 3.5mm 4-pole plug and is no longer useful.