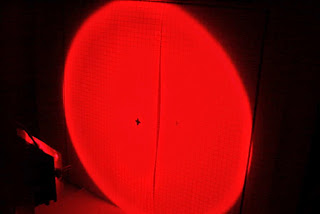 Yesterday I completed the construction of the crystal-controlled tone generator which will be used to modulate my lightwave transmitter during future clear-air / cloudbounce tests.


It was installed on the lightbox, right beside the original 556 CW beacon / tone generator. 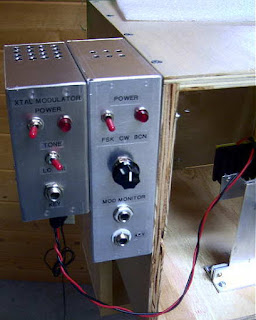 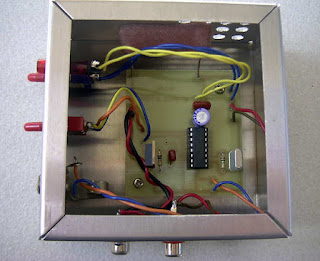 The crystal-controlled oscillator uses a CD4060 IC as an oscillator-divider and produces a ~550Hz or a ~1098Hz squarewave from the 4.5MHz crystal.

The original 556 tone generator will be kept for aural CW and beacon modes as it provides a stable enough signal for this purpose but for the very narrow bandwidths that I plan to use when digging into the noise with Argo, I reasoned that the signal needed to be more stable.

As can be seen by comparing the two oscillators (crystal on the left and 556 on the right), the 556 has a lot of drift (although it looks like it might eventually stabilize) and, as well, produces several spurious signals ... probably robbing power from the main tone. The crystal-controlled signal is rock solid and doesn't appear to generate any parasitic signals in the process. The trace below the crystal signal is unrelated to the oscillator.

When I first wired the unit up, I found an unstable low frequency oscillation from the 4060 during key-up conditions, due no doubt, to the lengthy leads inside the box. This was cured by adding a pull-up resistor to the keying line as shown in the final schematic below. 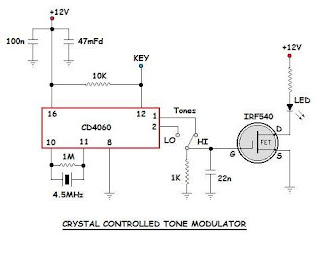 Now it's on to building another fresnel-lens receiver box which will be needed for any field work here on the island.
Steve McDonald, VE7SL, is a regular contributor to AmateurRadio.com and writes from British Columbia, Canada. Contact him at [email protected].