New Life For The Tri-Tet-Ten 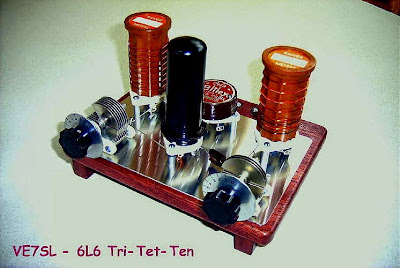 Sadly, I fear that my Tri-Tet-Ten has likely seen the last of its glory days of European 10m DX. It has been sitting, forlornly, on it's operating shelf beside my main station, for a few years now and has always been ready to spring into action whenever the winter F2 on 10m rolled-in. Although I anticipate more 10m F2 this coming fall, I don't think we'll get any barn-burner European openings as I have seen in the past. Conditions really need to be very good for the 6L6's 4 1/2 watts of 10m output to make it over the pole but over the past four winters, the one-lunger has worked over 100 Europeans on 10m F2.

Not being quite ready to throw in the towel on one of my favorite ever projects, over the past two nights I have sparked-up the tritet on 20m, which has been like the good old days in the evening ... strong signals over the pole peaking around 2130 local time.

As it did on 10m, the tritet did not disappoint! My first CQ (crystal controlled on 14031 kHz) was a pounced upon by two Europeans, eager to work a VE7. Over the two evenings, contacts were enjoyed with the following stations:

All of the stations were worked on my crystal frequency (a very old 40m xtal doubling to 20m) of 14031 kHz and answered my CQ. At just under 10 watts output, the average signal report received was 579.

Interestingly, two stations gave me 'T' reports of less than 9 to (incorrectly) describe the slight chirp on the oscillator. In the RST system, anything less than a 'T9' should actually describe the degree of undesired modulation (usually A.C. ripple) and not chirp. The proper way of indicating chirp is to append the report with a 'C'. Since chirp is rarely heard on the airwaves anymore, it's understandable that some might not properly understand the 'T' part of 'RST'.

So it looks as though the Tri-Tet-Ten has earned the right to stay on the side operating shelf a bit longer ... but I'm not renaming it the 'Tri-Tet-Twenty' just yet!
Steve McDonald, VE7SL, is a regular contributor to AmateurRadio.com and writes from British Columbia, Canada. Contact him at [email protected].