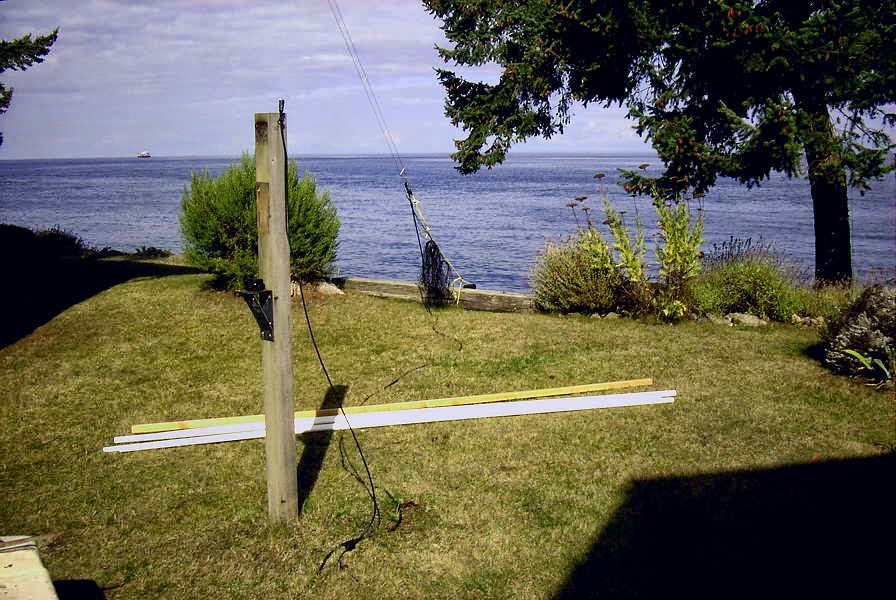 Some may recall my blog back in July (Wellbrook Loop Plans) describing a new loop that I had been thinking about as a possible replacement for my 10' shielded loop. I had been doodling various construction ideas using PVC tubing in an effort to keep it as light as possible, without introducing any metal near the loop. On Monday of this week, I dismantled the 10' loop in preparation for my new experimental rectangular loop. 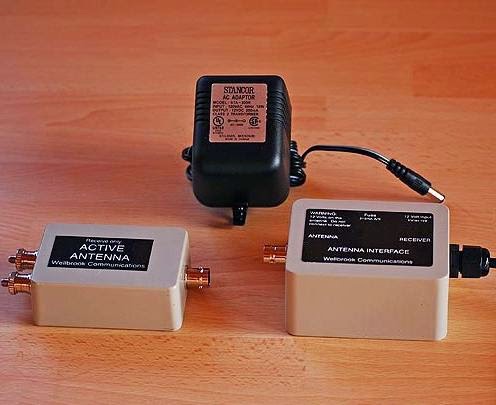 I've had the Wellbrook loop preamp here for a few months, so it was now or never, while the weather was still 'antenna-friendly'. Now I do understand that this goes against one of ham radio's long-standing traditions that dictates all antenna work must wait until the weather can't get any worse. Antennas built in the winter rain always work much better than ones put up in the summer. Hopefully it's not Wouff-Hong or Rettysnitch punishable but the fall DX season is almost upon us and I'm not waiting for the rain!
The new 'loop' is not really loop-shaped but is rectangular (10' x 20') and more like a Flag antenna shape. I considered a Flag but really don't need any back-end nulling capability since I'm mainly interested in listening to the east and to the north. 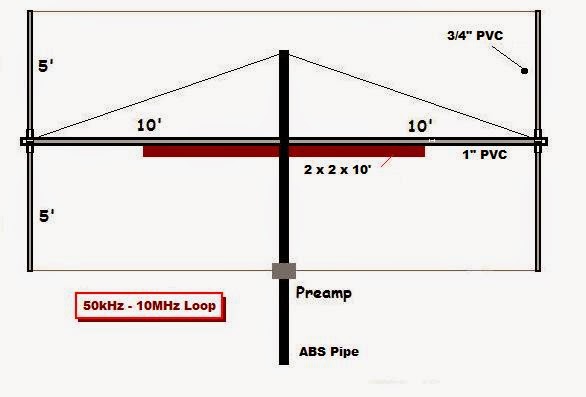 The main boom section is composed of two sections of 1" PVC thick-wall (Schedule 40) pipe joined at the center and reinforced with a 10' section of 2" x 2" Douglas Fir. In addition, the boom has a truss of 1/4" Dacron to take out any end-loading sag. The vertical end sections are 3/4" Schedule 40 PVC pipe, fastened with a T at the boom end. The center mast is made of 2" Schedule 40 ABS pipe with a long section of 1 1/2" ABS nested inside that telescopes upward to anchor the truss ropes and give some additional rigidity to the mast.


This type of construction would lend itself well to anyone interested in a rotating Flag antenna for the BCB / LF or 160m. The cost are very low, the structure is lightweight and the materials are readily available at most hardware outlets. 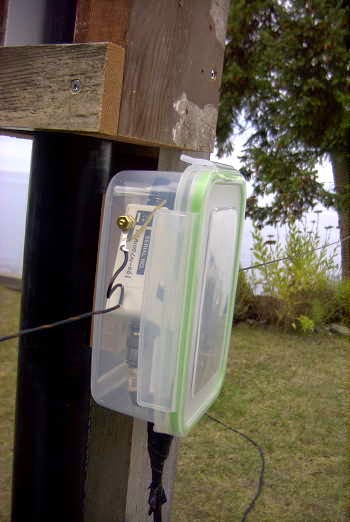 Although the preamp is completely sealed and weatherproofed, I still decided to mount it inside a container. The container also provided a convenient anchor to terminate the loop end wires (PVC-coated #18 stranded) without putting any tension on the soldered terminals.

Although I have not had much time to listen, and conditions are still in 'recovery' mode from earlier disturbances, initial indications are that everything is performing as well, if not better, than expected. It certainly outperforms my 10' active shielded loop by a large margin. I have yet to do any serious S/N comparisons between it and my primary LF receive antenna, a large inverted L, which must be tuned to resonance for the desired listening range. I believe that the very quiet loop / Wellbrook combination will provide an overall S/N improvement.

I have always believed that smaller loops provide deeper and sharper front-to-side nulls so I was pleasantly surprised to measure (using Perseus) null depths from 25-30db, on various groundwave signals....more than expected. Skywave signals also deliver sharp deep nulls in the order of 22 - 25db...again surprising, but I'll take them! A brief listen pointing S-E last evening turned up good signals from 1 kw'ers KYHN (1650kHz) in Fort Smith, Arkansas and KKGM (1630kHz) in Fort Worth, Texas. An early morning listen revealed good audio from JOIK (567) Sapporo, Japan and JOAK (595kHz) in Shobu. Down in the ndb band, little 25-watter 'IP' on 210kHz was an all-time new catch from Mobile, Arizona.

There is still much to learn from this new antenna system but the biggest challenge will be keeping it up all winter. I did lose one of my 10' loops after several years, due to wind when the main (un-reinforced) PVC mast eventually failed from flexing fatigue. I will tie the ends of the new antenna down when the winds get strong to reduce as much mast flexing as possible. I could however, run the risk of violating another long-standing radio tradition..."if your antenna stayed up all winter, it wasn't big enough". I just can't win.