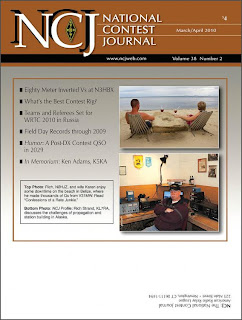 The March/April 2010 National Contest Journal arrived yesterday, torn and tattered as always (thanks again, US Postal Service!), and with it the results of K3MD’s informal poll of top contesters asking, “What’s the best contest rig?” It’s by no means a scientific survey, nor all-inclusive, but many of the Big Guns you’d expect participated.

No surprise to see the K3 and IC-7800 at the head of the pack. What does surprise me, though, is the absence of even a single mention of the Flex 5000 — can’t figure this out. Contesters, of all operators, rely so heavily on computers and software, and the Flex is clearly ready for prime-time. It’s fairly equal to the K3 and 7800 in terms of receiver performance. It just seems like a natural fit. Is it simply because it lacks a tuning dial? Is full PC control too new a trick for these old dogs to learn? Would love to hear theories as to why none of these top contesters have jumped on the SDR bandwagon.
Also surprised to see the Orion get only passing mention (and not in a good way, either). Wasn’t that the last “greatest-thing-since-sliced-bread” transceiver just a few years ago?
All that said, I’m happy to see the K3 get the attention it deserves from the radiosport community. Contesters at this level are fickle creatures; you can’t pin the fanboy label on them. Price is rarely an issue, considering the equipment on the inside of the shack typically costs a fraction of what is spent on antenna systems. They’re not swayed by fancy front panels or clever marketing. If the radio works better than what they last used, they keep it; if something else better comes along later, they’ll switch again. It will be interesting to see in ten years or so whether the K3 has the longevity among contesters that, say, the FT-1000D has enjoyed. My prediction: Yes (but then, I’m just an Elecraft fanboy and, worse still, a poseur-wannabee contester). Only time will tell; the zeitgeist changes direction in a hurry, and the DSP and SDR technology is advancing rapidly, so something new could come along next week to knock the K3 off its pedestal.