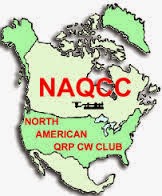 Yours truly will be on the air as N2A as follows:

Coincidentally, I will be taking a vacation day from work this Friday, October 17th - so after some chores, I will probably get on during the day to try and work some of the higher bands.

As you can see from the table, I was on 20 Meters last night. It was dead - deader than a door nail! So towards the end of my shift, I checked with the Reverse Beacon Network to make sure that there were no N2A stations on 80 Meters and I shifted over there. It was better. Not much, but I did manage to make a few QSOs.

For all the information about the NAQCC's Anniversary celebration, you can go to http://www.naqcc.info/main_n3a.html.  All the QSL information is there. To see a list of activity that's already been planned, go to http://www.naqcc.info/spot_schedule.php.  Keep in mind, this is activity that has been pre-scheduled to this point. More will be added as operator's personal time permits. I know that I probably won't be able to add my additional Friday or Saturday daytime operating time until relatively close to when it's actually going to happen. In addition, I'm not sure that I will operate from home or perhaps the local park. So check the schedule often as it will most likely be amended - a lot!

As I mentioned before, another good tool to check for NAQCC Anniversary activity is to simply go over to the Reverse Beacon Network and simply plug in the N#A call for any, or perhaps the particular district your interested in QSOing with. For example, just enter N2A where it says "search spot by callsign" under the map. That will tell you where WA2NYY, WK2T, K2YGM or myself happen to be at any particular moment.

Oh, and if you try to work me as N2A, please be patient! I am trying to make these QSOs just a tad more than "TNX UR 599, 73 DE N2A". Not ragchews, per se, but definitely more than get-it-done-with-quick.