My first QSOs on JT65a 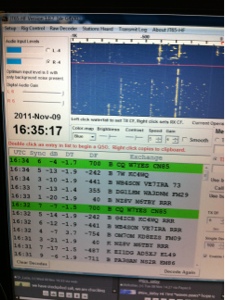 I’ve mentioned before that I wanted to try out JT65A on HF but had hit some problems with the laptop’s sound card and the software. Having got things going on WSPR yesterday; my 1W 20m signal got as far as VE6PDQ/1 in Edmonton. Having had an insight as to what I thought the sound card issue was with the JT65A-HF software was, this afternoon I connected it all up and started the software.

First of all I tried it out on 20m and got a decode, having sorted out the levels to the sound card. It seemed that the JT65A software needed a slightly higher input level than WSPR. Having done that I was delighted to work DL1AAH on 20m running about 1W.

I wondered what 10m would be like and sure enough it was busy! I answered a few CQ calls, but a particularly nice QSO was with W7YES – I was running about 10W to the vertical.

By about 1830z the band seemed to have faded but I left the software running whilst we had supper. To my surprise, when I popped up later, the band had opened again and the software had logged some further US stations including WY7LL.

I’m pleased to have this working and suspect I shall have a lot of fun with it.

One Response to “My first QSOs on JT65a”