This evening, I was watching the tweets go by and realised that it was the peak of the Quadrantids meteor shower. Not having a 2m beam up at the moment, the only possibility was 50MHz. And though I have got my old 50MHz beam back from a friend who had it on long term loan, it’s not in a state to go up at short notice. So the only game in town is the V2000 vertical.

I wasn’t too worried as I had heard a few meteor bursts on the vertical in the past, so I guessed if there was any reasonable activity, I might hear something.

I quickly saw some bursts from an SM7 station and then a very considerable number from SK0TM up in JO86. So many, that I decided to go up to the shack, having been monitoring it all from the comfort of the sofa on the iPad.

Very much tongue-in-cheek, I started to call SK0TM with a report. To my enormous surprise, I very quickly got a R26 report back so was able to send Rogers and receive them. By the time we got to try and exchange 73s, the conditions seemed to have dried up, but we both had all we needed for a complete QSO.

Thank you, Stig – I know it’s possible to make MS QSOs using simple aerials, but I’ve never done it with a vertical before! 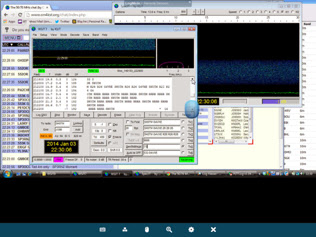