10 August 2013 | by Mike AD5A  |  Share |  Tweet |  Leave a Comment (1)
A lot is written in the SOTA Blogosphere about backpacks and which one is the ultimate one for treks into the wilderness to operate portable. What can be quickly be deduced from these articles is that the ultimate backpack is a matter of taste and philosophy. Will you want to account for every possibility or have a quick exit strategy should something go wrong? Your philosophy can be driven by the circumstance, e.g., if I live in the mountains I am quick to abandon a summit attempt as I can always do it tomorrow. However, if I am in the mountains on a vacation or otherwise limited schedule, I might be prepared to endure more in-climate weather to get a summit activation in. Each philosophy dictates a different approach.

As with any activity the more experience you get, the more refined your approach becomes and so it has been with me. My first activation was last March. I took my KX3 with an FT-817 as backup, an Alexloop, a Buddistick, several coax jumpers (BNC - PL-259, BNC - BNC and other combinations just in case), a pound of trail mix and several bottles of water. All this for a 3.5 mile round trip. I didn't even want to weigh it. Pack Evolution
I started with the black Kelty, then the red North Face
and finally I've progressed to the CamelBack Fourteener in the middle
I started with a big pack and I filled it up, which is a big mistake. So I realized maybe I should downsize a little. So I began to rationalize what I carried. I realized that the KX3, while a very nice radio, is a lot to carry in both weight and bulk. I am really more of a CW guy, so I was carrying around a lot of capability that I didn't need. I owned an ATS-4 which weighs a few ounces and is a CW only rig with 5 bands. Also, the Alexloop is an effective antenna, but it's bulky and takes a lot space in a pack. For relatively long hikes, it's too much. The problem with bulk is that it makes you get a bigger pack and human nature dictates that you fill it up, so you unconsciously take more stuff. For an antenna I went to a trail friendly EFHW 40/20/10 supported by a carbon fiber fishing pole that telescopes to 21 feet.
If I am on a drive-up/walk-up summit, I might carry some of the bulky stuff because it's easy. I recently used the Alexloop on Mt. Locke because I didn't have to carry if far, sot the situation can dictate a different configuration.
The other consideration is water. You should get a pack that allows you to insert a water bladder with a drinking tube accessible to you while you are hiking. This not only allows you to drink on the go, it is a better way to carry water and eliminates the need for bulky water bottles.
As you can see above I have continually downsized my pack. The CamelBack Fourteener is about 1/3 the capacity of the Kelty that I started with. Below is what I carry. 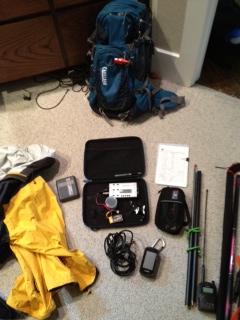 Typical Activation Load
My radio is in an iPad portfolio along with the power supply, paddle and ear phones. I carry two antennas, a modified Buddi-stick and a carbon fiber telescoping fishing pole with an EFHW antenna, VHF radio, coax, GPS, log, first aid kit and rain gear. The pack above weighs about 9 lb. The bladder in this pack holds 100 ounces of water (gallon ~ 128 ounces). I been on an activation in the heat that was 9.5 miles round-trip and I had water left over, so you don't have to fill it up every time. Without water and without any food/snacks the above weighs, including the pack,  about 9 lbs. I do have a redundancy with the antennas, but that is to allow for different conditions and what I have time for on the summit. If I lived in the mountains, I would only take one antenna.
I have climbed Mt Sherman, 14,036 feet and Emory Peak, 9.5 mile round trip using this pack and I haven't lacked anything that I needed.
However the game continues, I am still looking for ways to cut back.
Mike Crownover, AD5A, is a regular contributor to AmateurRadio.com and writes from Texas, USA. Contact him at [email protected].

One Response to “My Backpack Progression”