Thanks to the Battleship New Jersey Amateur Radio Station, this weekend has been organized and dedicated as Museum Ships Weekend.  106 restored military ships from around the world, which now serve as museums will be on the air this weekend. 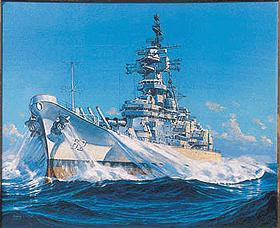 USS New Jersey
For a detailed list of all the ships that will be participating, as well as a list of suggested operating frequencies – please click here.  If you work 15 different ships, you can submit your log and send away for a certificate.  I have a ton of stuff going on and this will be a super busy weekend for me, but I am going to set aside at least a little time for this.
72 de Larry W2LJ
QRP – When you care to send the very least!
Addendum – I got on the air for a bit tonight and worked seven stations commemorating various ships, some of which are sunk and some of which are museums. Unfortunately, the minority were found to be operating CW, so I had to resort to picking up that little black thingy – I think it’s called a microphone?  Anyway, the ships I worked tonight were:
VA2GNQ – HMCS Onondaga – Submarine
K8F – SS Edmond Fitzgerald – Freighter
DL0MCM – MV Dresden – Cargo Ship
WW2IND – USS Indianapolis – Cruiser
WW2MAN – U-5075 Seehund – Miniature 50 ft German WWII Submarine
K8B – SS Carl D Bradley – Limestone Carrier
K8M – SS Daneil J Morrell – Freighter
I also worked K1USN, but they’re not on the list of participating ships.  So I am just under the halfway point towards earning a certificate.
The fellow behind the microphone at K8F was not named Gordon. I was disappointed.  😉
Larry Makoski, W2LJ, is a regular contributor to AmateurRadio.com and writes from New Jersey, USA. Contact him at [email protected].