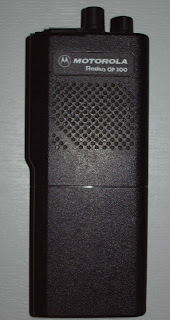 I seem to be collecting VHF handhelds at the moment. This is the Motorola Radius GP300 I bought for £1 at the Blackpool radio exhibition yesterday. The seller had quite a number of shiny new-looking commercial handhelds in a heap on the table, all without batteries, which were being sold for £1 each. He told me they were all UHF. Most were Midland radios, but there was this one Motorola which in the end I decided to get because I thought it might be easier to find information about it. I should have got one of the Midlands as well, after all, it was only a quid!

Today I took a closer look at what I had bought, and tried to find out something about it from the internet. From the model number I was able to find out the capabilities of the radio and I actually have a VHF handheld which can cover 144 – 176MHz in 12.5kHz steps, 8 programmed channels with 5W output. I can’t test if it works because I don’t have an adapter for the strange type of antenna socket, but Motorola to BNC adapters are available on eBay. However for the radio to be any use I will need to program it with some 2m band frequencies.

There is information on the web showing how to build a programming interface, but you can actually buy one ready made from Hong Kong for little more than the cost of the parts. The difficulty appears to be getting hold of the all-important programming software. Apparently it was very expensive and Motorola doesn’t turn a blind eye to free sharing of it among the amateur community so I was unable to find any download link.

None of the sites that give information about programming these radios provide any help about how to get hold of the software and they are obviously fed up with being asked about it. So there probably isn’t much that I am going to be able to do with this radio. A pity, as it seems to be well regarded judging by the reviews on eHam, presumably posted by users who got them from dealers pre-programmed with the channels of their choice.