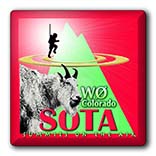 For years now, I’ve been doing Summits On The Air (SOTA) activations using VHF and higher frequencies. The GO TO band/mode for VHF SOTA is 2-meter FM because of its overall popularity. Just about everyone has a 2m FM radio (well, almost everyone). Still, if you are on a remote peak you may not find anyone within range to work. Because of this, it really helps to optimize the performance of your portable VHF station.

I’ve already written that the first step is to upgrade the rubber duck antenna to something that actually radiates. My measurements indicate that a half-wave antenna performs 8 to 10 dB better than your typical rubber duck. That’s a big difference. I tend to favor the collapsible half-wave antennas because they are compact and don’t require any support. Another option is the J-pole or Slim Jim antennas, typically build out of twin lead or ladder line.

The next step up is to use a small yagi antenna, such as the 3-element Arrow antenna. Although Arrow does not specific the gain of this antenna, it has been measured at the Central States VHF Society conference as having ~6 dBd of gain. I’ve been on the lookout for a higher gain antenna but I have not found one that has significantly more gain while still being backpack portable.

Frequency Modulation performs very badly when signals are weak. The well-known threshold effect means as the signal level decreases at the receiver it simply crashes into the noise. Linear modes such as CW and SSB work much better when signals are weak, which is why they are popular with the serious VHF crowd. I’ve used my Yaesu FT-817 to make SOTA contacts on both 2m and 70cm SSB and CW. My all time best distance on 2m during a SOTA activation was 229 miles, a QSO with N7KA from Capulin Mountain using CW. However, the problem with SSB/CW is that there are much fewer radio amateurs that operate that mode. I estimate that on a typical day, there are 10 to 100 times more hams on 2m FM than are on 2m SSB/CW.

I’ve noticed that I sometimes hear stations on 2m FM but they cannot hear me. Further investigation revealed that they were typically running more power than me. I had my little HT putting out 5W and they were running a 50W mobile. That got me thinking about whether I could increase my power while still having a backpack-compatible station. SOTA operation is typically QRP, around 5 or 10 W of power. However, SOTA does not specifically state a required power level…it’s really driven by the need to operate backpack portable. Hence, there are very few 1 KW amplifiers in use on SOTA summits.

Some of the Chinese manufacturers now offer compact dualband (and even quadband) VHF/UHF transceivers that output 10 to 30 watts of RF power. I purchased the Tytera MD-8600 based on my experience with other Tytera products. The radio’s specified output power is 25 watts on 2 meters. The DC power current is rated as 0.2 A on receiver and 4A on transmit, not too bad for battery operation. I paired it with a 13.2V LiFe battery rated at 4300 mAH. In theory, that would provide over an hour of transmit time or 21 hours of receive. That should be plenty for the typical SOTA activation. The size is a slightly larger than 4″ W x 1.5″ H x 5″ D and it weighs about 2 pounds. All in all, this setup is very compatible with the typical backpack portable operation.

Let’s do a little math to understand the difference in transmit signal. The TH-8600 puts out 25W compared to the 5W from FT-60. The difference in dB is 10 log (25/5) = 7 dB. Someone said to me “hey, that’s only a little more than one S unit, which is normally defined as 6 dB. Is that really enough to make a difference?” To which I responded, “yes, 7 dB can make the difference between making the radio contact or not…when signals are near the noise floor of the receiver.” For strong signals, it just doesn’t matter.

I’ve used this configuration on three SOTA activations and I like the results. On two of the activations, I compared the TH-8600 (25W) to the Yaesu FT-60 (5W) that my hiking partner (Joyce/K0JJW) was using. Both radios were connected to 1/2-wave vertical antennas, operating on 2m FM. The radios performed the same on receive, as expected. But the weaker stations we were working had trouble hearing the FT-60. Again: if signals were strong, it didn’t matter but the extra power made the difference when near the noise floor.

I checked out the basic performance of the radio on my test bench and found it to be adequate. The transmit frequency was spot on, the harmonics and spurious on 2m were about 60 dB below the carrier. The receiver sensitivity was about 0.2 microvolts. The RF output power was low, 22.4 W on 2m and 17.7W on 70cm (compared to the specs at 25W and 20W).

I was hoping the receiver performance would be better with regards to rejecting adjacent channel signals and intermodulation. I don’t have a good test bench for that but I can tell you that I noticed some unwanted interference from transmitters that were not close to my location.

How Many dB’s Is That?

So let’s summarize the dB situation.

Wow, I can improve my signal strength by over 20 dB be making these improvements! I should point out that the antenna improvements help on both transmit and receive, while the increased transmit power only improves your stations transmitted signal.

One Response to “More Power For VHF SOTA”