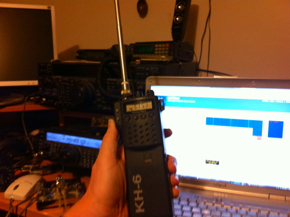 Perhaps you remember a few months ago, I picked up the KH-6 50MHz handheld from eBay. To be truthful I hadn’t done a lot with it.

I was a bit disheartened when I took it up White Horse Hill and failed to hear either the GB3RAL beacon at Harwell or the GB3ZY repeater at Dundry, both of which I thought should have been audible. So, I had a feeling the rig was perhaps a bit deaf.

A few days ago I was moved to investigate a bit more and the results were interesting. I examined the ‘rubber duck’ which had come with the rig. It turned out to be an AOR scanner antenna – probably not very efficient at all on 50MHz. Connecting the rig up to the 50MHz antenna on the roof, the GB3RAL beacon was end stop!

On my desk was another scanner antenna from my Dad’s old scanner which was a telescopic rod antenna. Although still rather less than a quarter wave on 50MHz it stood a better chance. Promising too was the fact that I could weakly hear the GB3RAL beacon keying.

So, I think the receiver’s just fine. I’ll take the rig up the hill next time and see what I can hear. Incidentally, the battery pack has great life – it’s held its’ charge over an extended period. Impressive!