See original post here.  Convinced that I had it working, I put the IC-290A aside and worked on some other projects.  But, when I came back to it a few weeks later, the display was still disappearing.  So, armed with the schematic and the block diagram, I began narrowing it down.

The display digits and tuning A/D converter are both driven off the same bus.  But, since the disappearance of the display did not bring loss of receive, that gave me some confidence that it was not affecting the synthesizer.  In order to simplify the analysis, I elected to assume that it was a single component (almost certainly a cold solder joint or an electrolytic capacitor) at fault.

Another clue was that the VFO dial ceased to operate once the display started acting up.  Taking the single-point-of-failure assumption into account, this strongly implicated the microprocessor on the LOGIC board as a starting point.  The only suspicious device that I could find on the schematic was C9, a 1000-uF, 6.3-volt electrolytic capacitor on the Vcc line of the microprocessor.  So, I replaced it with a similar value unit from my junk box. 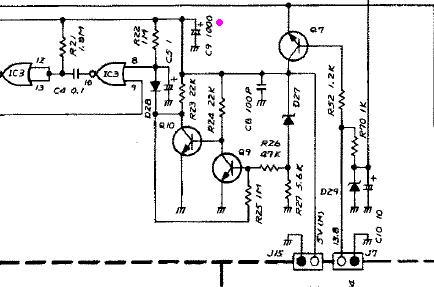 And, the radio seems to be working…for now.   I did park it on WA1ZMS/B overnight and it is still running.