This morning, I decided to try the Funcube Dongle Pro Plus on HF. I connected it up to the Butternut vertical and tuned to 14MHz. First impressions were very good, with plenty of signals coming through with good quality.

Zipping around the signals on CW, I wondered whether I could get a Skimmer going. The Skimmer decodes the CW from an SDR (or other receiver) and shows the text on the screen. CW Skimmer software was developed by VE3NEA a few years back and it has changed CW contesting for ever, I understand. Happily we don’t need to worry about that here!

I downloaded the trial version of the software and installed it. When I looked at the setup, there was no mention of a Funcube Dongle, so I decided to try it as a Softrock receiver as suggested on this web page. I also grabbed the FCD Frequency utility which allows you to control the frequency of the dongle. I set it up to run on 28MHz and set it going – sure enough it worked! 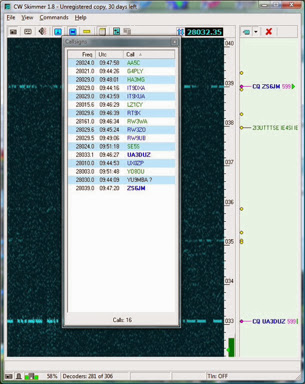 Even more impressive was when I set the Skimmer going on 7MHz, with Ws and JAs coming through (good band at this time of year, if you’re so minded, 7MHz). There were a few false decodes, which looked like Skimmer had done its best to resolve something that wasn’t really a CW signal, out of band, into CW! Fun though.

I have no particular need for a Skimmer on HF, although perhaps it might be fun on 28MHz, but certainly I can see it would be good during an Es opening on 50MHz.

I had hoped to be trying to receive the packet digi signals from the ISS today, but the digi was still switched off, with the astronauts engaged in a spacewalk to fix the errant pump. This proved a mixed blessing – as both Peter MI0VAX and Andrew M6GTG mentioned they’d been listening to the EVA comms from the astronauts on 143.625MHz, so I decided to try that.

Once the ISS was in range of Moscow, a huge signal, doppler shifting, appeared around 143.625MHz and it was easily possible to hear the astronauts talking in Russian. The FCD was connected to the V2000 vertical for this. 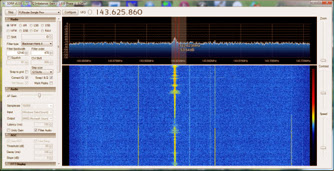 I noticed that the VO-52 satellite was making a fairly low pass during the late afternoon. I was curious to see if I transmitted a CW signal, using my terrestrial 70cms antenna, whether I would be able to hear myself coming back through the VO-52 transponder on 145MHz, using the FCD and the vertical antenna.

I haven’t quite figured out the doppler shift and where to transmit and where to listen, but after a bit of fiddling and faffing, I was indeed able to hear my CW coming back through the satellite. I tried a hasty CQ, but no luck this time… but it is the first time I have heard myself on VO-52. I will do better I am quite sure!

Feeling quite happy with all of that, I was just about to pack up in the shack, come downstairs and be sociable, when I noticed a tweet saying that there was some 50MHz Es about. I had missed an opening yesterday, so was keen to see if I could pick something up today.

I tuned the FCD to 50MHz and could immediately see LY1R coming through with a nice signal, so moved the antenna onto the FT847 and worked him after a couple of calls followed by OK1DOL. Things seemed to quieten down, so I popped the antenna back on the FCD for the benefit of the panoramic display.

This was very handy and I spotted several signals which I might have missed, had I just been on the FT847, so there was some rapid switching of the antenna between the FT847 and the FCD as I worked people, including DL1AX and DL3RBH on CW. I missed an SP5 on CW, who dived into the noise before I could work him.

All in all though, a very nice winter Es opening and I was delighted to find that the FCD worked so well on the band – the panoramic display proved so useful for spotting signals across the band.

Several times today, I have thought – why didn’t I get one of these FCDs before! Thank you again, Santa!