A previous blog described a series of tests that Mark, VA7MM, performed demonstrating the effectiveness of his newly acquired MFJ- 1026 Noise Canceller.
He, along with Guy, VA7GI, recently had the opportunity to compare the performance of the MFJ against Guy's Timewave ANC-4.

Guy Immega, VA7GI, and Mark Mattila, VA7MM, undertook side by side comparative tests of Timewave ANC-4 and MFJ-1026 noise cancellation gear (photos attached) by listening to interference at VA7MM in the HF spectrum between 7 MHz and 14 MHz. The program Spectran was used with the receiver on AM to adjust each unit for best performance and observe the relative performance of each. A system of coaxial relays was used to switch instantaneously between the units (photos attached). 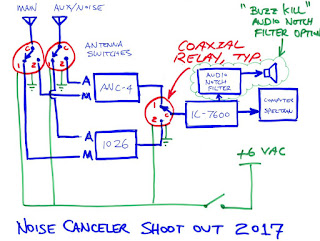 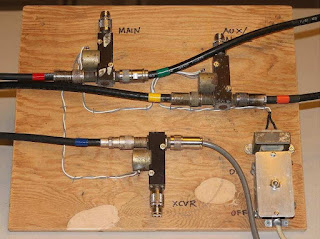 For practical purposes Timewave’s ANC-4 and MFJ’s 1026 are equal performers for eliminating interference in the HF spectrum.

Our findings corroborate the earlier findings of VE7CA that are posted on his website.
Switching the units in and out of noise was previously assessed on 40m CW, broadcast and raw noise. Examples of these tests are in a previous blogspot.
Commentary:

- main antenna in the tests was a multiband dipole at 30m above the ground.

- noise sense antenna was a Cushcraft R7 vertical antenna located 20m away from the main antenna.

- receiver was an Icom IC-746Pro.
- both units tested have the same nulling capability.
- the preamp on the MFJ was found to be useful in certain instances for boosting the noise signal.

- in one test instance the Timewave unit produced intermod with AM broadcast leaking into the receiver when the noise gain was set near maximum.

- in instances where noise was coming from more than one direction, the filters could eliminate one noise source, or the other, but not both.

- both noise amplitude and phase need to be alternately adjusted to attain a good null on the units.

- using Spectran or SDR with the receiver on AM helps in adjusting the units.

- discussions are on combining the noise canceller with a small vertical plane receive loop on 160 or 80m. The idea is that the combination of the two could enable noise in two directions to be nulled. The receive loop would be pre-amplified.

- having two noise cancellers in series was also discussed as a means of nulling noise from two directions. An issue with this approach is that more processing electronics are put ahead of the front end of the receiver and this introduces its own noise and may create intermodulation.

- I like that the MFJ unit has gain controls for both the noise antenna and the main antenna. Other differences include MFJ providing both relay and RF sense T/R switching whereas the Timewave only has RF sense capability. The noise antenna connector on the MFJ is an SO-239which I find more practical than the RCA phono socket on the Timewave. As far as mechanical construction is concerned, the Timewave is more robustly built.


We’re open to any questions on these findings.