Six months ago I bought an old Kenwood TH-205 on eBay for spares or repair. I got it working, managed to find a new replacement NiCad battery pack for it and built a drop-in charger for it for a total cost of well under £20. The backup battery had died so the memories didn’t work and the radio wouldn’t even remember the frequency it was last used on, but I was pleased just to have got it working and I was afraid the replacement would be an expensive part the cost of which couldn’t be justified. 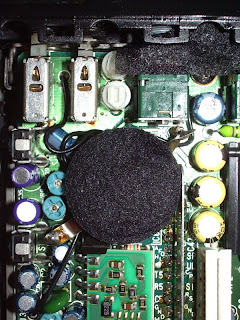 Today I decided to have a look and see if the backup battery could be replaced. I wasn’t sure where the backup battery was, but I guessed it might be hidden under a foam pad in the centre of the circuit board. I had a peek and was pleased to find that it was a CR2032 3V lithium button cell. However it wasn’t your regular CR2032 cell that you can buy in stores, but one with solder tags spot welded to each side.

I looked on eBay, but although this turned up zillions of sellers of the regular cells at prices from five for a pound, no-one had the version with solder tags. I looked to see if I could fit a cell holder into the radio but the PCB mount one I had was quite a bit thicker than the cell itself and there was insufficient space for it.

I tried a Google search and Digikey had a CR2032 with solder tags for £1.17 a time, but there was a £12 shipping charge which made it uneconomic. The cost of the repair needed to be proportionate to what I paid for the radio.

So I decided to try taping wires to a regular CR2032 cell. I doubt that I could solder to it, and that probably isn’t a good idea anyway. I had a CR2032 which came in a kit I purchased recently but haven’t started to build yet. It was new and sealed in its packing so I thought I would use that. It was a good job I decided to check the voltage after taping the wires to it, in order to verify they were making good contact, because it was as dead as a dodo! Even the one I took out of the radio showed more signs of life, as it acts as a capacitor and charges up a little bit when the battery power is turned on.

So it’s back to eBay to order a couple of replacement cells, one for the Kenwood and one for the kit I haven’t yet built.

One Response to “Memory fix”