11 May 2017 | by Steve VE7SL  |  Share |  Tweet |  Leave a Comment (0)
There still seems to be a number of 'big guns' showing up each month, that I have not heard or worked before as well as several 2-Yagi 'little pistols' that I am able to work under very good lunar path conditions. I suspect that having just 1-Yagi puts me in the $2.95 'Red Ryder' category! 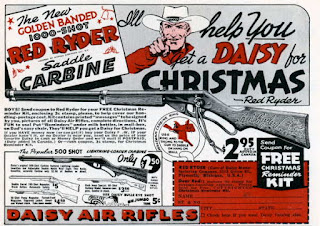 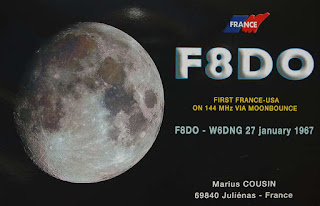 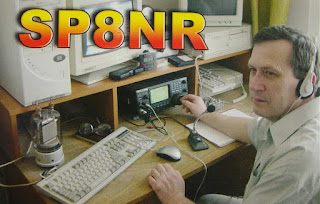 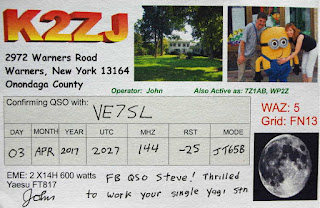 Whether this is because of better than normal lunar path conditions or just a result of my neighbour's tree-pruning, remains to be seen.

The few days of operating in early May were, as usual, planned to take advantage of the Moon's closest approach as well as the Moon's most northerly declinations. The latter condition puts moonrises directly out in front of the house and looking across Georgia Strait's many miles of saltwater. The extra theoretical 'sea-gain' appears to be a reality under these conditions and allows my 9el Yagi to garner another 6db on both transmit and receive paths, making it perform more like a '4-Yagi' array.

Eight stations were worked this time around, with six of them being new 'initials', bringing my EME total from 95 to 101. Several of these stations were speaker-audible, at CW levels.


For now, any earlier thoughts of building a 4CX250 300 watt amplifier have been put on hold, while I continue to slowly work my way through what seems a never-ending list of workable stations.
Steve McDonald, VE7SL, is a regular contributor to AmateurRadio.com and writes from British Columbia, Canada. Contact him at [email protected].