Unlike winter's northern moonrises, the summer ones occur close to 'new moon' time and for a few days on the much favored northern path, the moon is too close to the sun, resulting in lower activity and higher noise. As well, with the warmer summer weather, outdoor projects or other summer activities often take priority over ham radio operations at this time of the year.

Nevertheless, I did manage to work five stations with my small station, and added four 'new initials', bringing my total unique-station QSO total to 105 ... it seems there are still plenty of folks out there that I have yet to work! 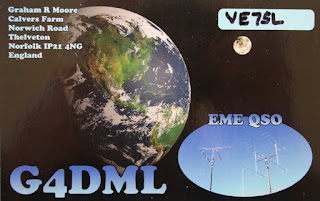 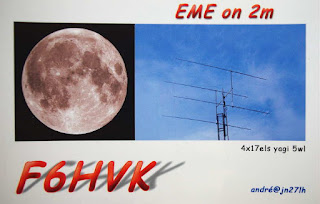 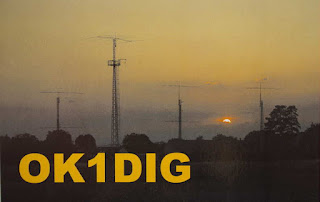 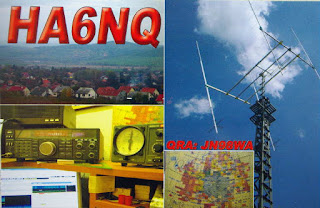 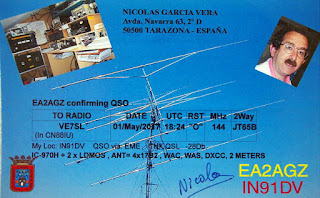 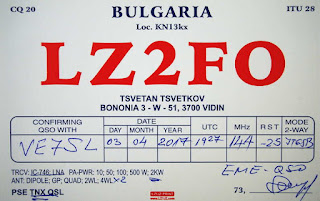 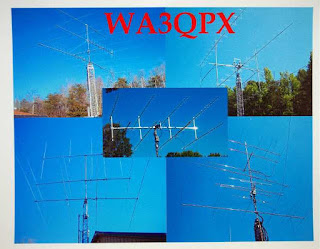 With the summer Sporadic-E season now in full swing, I've had the opportunity to make some early observations regarding the growing use of the weak-signal digital modes. It seems my previous suspicions about the migration from traditional modes to the digital modes is occurring even more rapidly and in much larger numbers than I had expected. Almost all early activity has been concentrated on both JT65 and JT9 modes and most of the chatter on the ON4KST 6m chat page centers around these digital modes.

So far this season I have heard much more DX on JT65 than on CW or SSB, including two stations in Europe on Tuesday (EI4DQ and F5LNU). It seems that many QSO's are taking place with signals that are usually too weak to be heard by ear (~ -16db or weaker) and if listening for CW signals, the band would appear to be pretty much dead. With no full-blown openings to Europe yet, I just wonder if stations will stay put on JT65 or move to the much faster CW mode for making quick contacts when the propagation allows?

Making JT65 contacts is not a particularly fast process, with most QSOs taking a minimum of four minutes, if both operators are well acquainted with the procedures ... longer if not or if QRM or propagation throws a spanner into the works. Some of the newer JT9 sub modes allow for quicker exchanges as does the much less sensitive MSK144 mode but with so many options now available, it's often difficult to get everyone on the same mode or at least figure out what mode you are seeing!

I can see the advantages of using these modes when conditions will not support CW but will still allow digital decodes. If the normal 'weak signal window' can be sustained for a much longer time period than the usually short-lived audible CW-level window, perhaps more stations could actually be worked on these modes even though the QSO rate is much slower. But I still think that many easy CW QSO's will inevitably be missed when operators are watching their digital waterfalls and ignoring the CW end of the band ... of course, if everyone is doing that, then there will be nothing to be heard on CW, even though conditions may well support good signals.

It's a strange new situation and I'm probably not the only one that may be worried about the negative effects of the new weak-signal modes on 6m ... time will tell, but for me, if things keep going along this path, much of 6m's magic may be gone along with it.

Some other initial observations are:

- maybe it's possible to work more DX on weak signal mode, even though it is slower, because of the possibly longer propagation window at sub audible signal levels? ... ie. on a seemingly 'dead band' by ear.

- many are using the wrong sequence when calling for EU or JA. Folks need to pay attention to what sequence the DX is using!

- if your neighbours are running on even or odd sequence, then it might be neighbourly to also use the same sequence to avoid causing disruptive QRM. This seems to go south fast, once the band breaks wide open and it seems like 'every man for himself' ... not unlike 50.125!

- there are too many weak-signal modes and it would be advantageous to settle on a 'standard' mode for 6m DX. It seems as though many are wasting valuable time either switching modes or trying to figure out what mode they are seeing but not decoding! On long haul 6m Es, things change too quickly to waste time.

- there are still a lot of over-driven signals or signals with 60Hz components causing double decodes +/- 60Hz from their main signals.