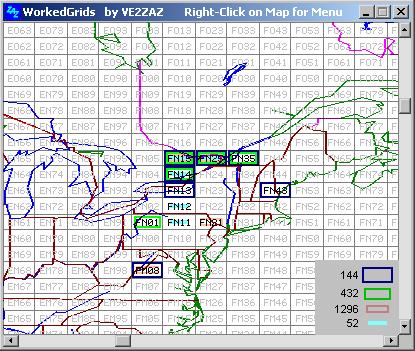 I was playing around in the RSGB’s 432MHz activity contest last night (enjoyable but no-one terribly distant worked) when I saw a tweet go by, from AI4RI, I think, asking if anyone knew any tools for mapping the grid squares that they’ve worked at VHF.I use the Winlog32 logging program, written by Colin, G0CUZ which has some grid mapping capability built in – although it does not overlay the squares onto a map.Another tweet from AI4RI quickly appeared saying that he’d found the WorkedGrids software from VE2ZAZ. I’d seen it mentioned before but not tried it. The software installed quickly and I was able to point it at an ADIF file that Winlog32 had created. If you have a logging program that keeps the log in plain text, ADIF or Cabrillo then you can use WorkedGrids to scan the file automatically and plot your grids on a map. Winlog32 keeps the log in an Access database so I had to create an ADIF export and point WorkedGrids at that.WorkedGrids setup allows you to select which bands you are interested in, I chose 50,70,144 and 432MHz, but you could just as easily select other bands. Having done that, a basic but effective map was displayed, showing the grid squares I’d worked on each band.I seem to remember that DX Atlas by Afreet Software – as used by the FSDXA’s 3B9C expedition some years ago has a similar capability.