Mailbox, Coffee And The ‘Stew’ 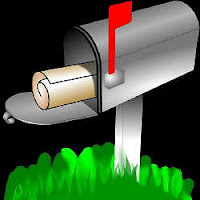 Recent mail has brought two nice surprises. As I am preparing for this weekend's ARRL 160m CW affair, a certificate from the ARRL arrived ... from last year's 160m CW Contest!


It seemed that I had somehow stumbled into top score from VE7 land for the single-op, low power division and since I haven't seen a QST in decades, this came as a complete surprise. 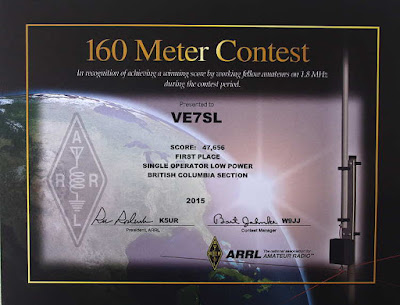 Over the years I've always tried to test the 160m waters at contest time just in case conditions are amazingly good ... which they haven't particularly been for the past few years of solar angst. Even piddly Cycle 24, for most of its lifespan, has proven powerful enough to mess up the Topband.

The 160 contest I enjoy the most is the December Stew Perry. It's the only one that's scored fairly and QSO points are determined by distance. Compared to working something close, any of the east coast grids from out west will get you a sack-load of points ... anything off continent earns you a boat-load. My strategy in the Stew has always been to 'search & pounce' the FN and FM grids for their high value point reward. If I had more late-night staying power in any of these affairs I could probably do a better job but I've found my fondness for the warm fleece-sheeted bed beckoning earlier each year. I'm sure it has nothing to do with getting older ... right?

I honestly don't know how some guys, much older than myself, can hang in there 'til dawn. Maybe it's coffee, which would certainly do it for me. If I even look at a coffee after the noon hour, I'm still counting sheep past midnight. A late night contest-coffee for me would guarantee no sleep until the following night unfortunately.

The second surprise was a nice QSL from Mark, WA9ETW in Wisconsin, confirming our recent crossband QSO ... 630m to 80m CW. Notice Mark's receiving antenna used on 630m, just a 100' wire about 15' off the ground! It doesn't take much to hear domestic signals on 630m so if you already have the WSPR software installed and are familiar with its operation, why not set your receiver to 474.200 in USB mode and see what you can hear. There are stations from coast to coast beaconing every night on this band. Be sure to set your software to upload your decodes to the WSPRnet site so that everyone, especially the beacon operators, can see who you are hearing.

If we worked in the recent 630m crossband event and you'd like a card, please let me know ... I'll be happy to put one in the mail for you. 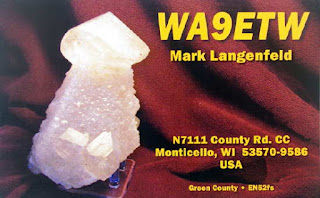 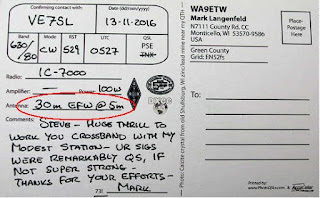 How I do wish that the FCC would get on with it and legalize the 630m band in the U.S.A. Hopefully the turnovers in Washington will not translate into further delays as is often the case when big governmental changes are in the works. In the meantime, hopefully we can at least work each other in the ARRL CW 160 this weekend!
Steve McDonald, VE7SL, is a regular contributor to AmateurRadio.com and writes from British Columbia, Canada. Contact him at [email protected].

2 Responses to “Mailbox, Coffee And The ‘Stew’”