Made my first satellite QSO

2 October 2015 | by Andrew MØNRD  |  Share |  Tweet |  Leave a Comment (5)
As well as flying a high altitude balloon another of my aims this year was to finally make a satellite QSO. Pleased to say last night I finally achieved it!

Last month Abdel Mesbah M0NPT chairman of the Hucknall Rolls-Royce ARC came to South Kesteven ARS to give an informative talk on operating amateur radio satellites. Abdel was the first UK operator to receive the AMSAT-UK 73 on 73 award for making 73 confirmed contacts via the FUNCube satellite AO-73.  http://amsat-uk.org/2015/01/28/abdel-m0npt-73-on-73-award/

Abdel explained all the current active satellites, how to work through them and gave hints and described techniques for achieving success on this more challenging mode of operation.

Spurred on I opted to target the SO-50 satellite which until very recently this was the only satellite carrying a FM transponder. The satellite receives on 145.850 MHz and retransmits them on 436.800 MHz (+/- 10 kHz Doppler shift). Operation requires the use of CTCSS (PL) tones of 74.4 Hz which starts a 10 minute timer and then a 67 Hz tone used for the contact. More details of how to operate and a video are on the AMSAT-UK website

I initially tried using just a suitably programmed Baofeng UV-5R with a NA771 whip and could clearly hear the downlink on higher passes, I called a few times with no luck.

I hadn't monitored SO-50 much before and sadly it seems to suffer from very poor operating, with stations calling over contacts in progress, or stations continually calling CQ CQ seemingly oblivious to any reply and those that just keep calling "hola hola hola" for whatever bizarre reason! I would be lucky to get through the QRM with just the whip so I needed a better antenna.

Despite being extremely busy at the National Hamfest last weekend I did manage to get hold of a dual band Yagi that was reasonably lightweight for hand held use and capable of being easily dismantled for transporting. (The Moonraker YG27-35 Dual Band) it has a single feed point and two adjustable gamma match sliders and was easy to adjust using my analyser.

It has a single feed and I tried it with the Baofeng and reception of the downlink was excellent, again on a couple of passes I tried answering calls with no success.

Last night I decided to try again but with the FT-857D set at 10W output. I put it on a small workbench in the garden and powered it from my portable SLA battery. I ran split operation with the 2m Tx VFO set at 145.850MHz with 67Hz CTCSS, the 70cm Rx VFO set at 436.800Mhz I was able to adjusted it down in 5kHz steps during the pass. I got the wife to take a picture while I was operating. 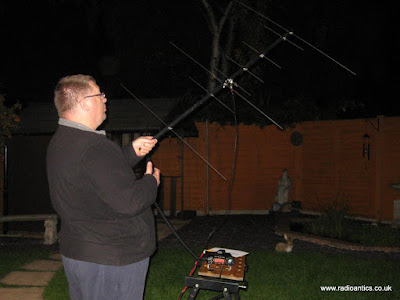 As I started to hear the downlink I heard Abdel M0NPT calling and answered him, I was shocked when he came back and we exchanging details - that was it I had made my first QSO via an amateur radio satellite! Then amazingly other stations started calling me and I was able to also work DO2SYD.

I did manage to record it on a small dictaphone (did have a bit of a brain fade with my callsign at one point!)

I could get hooked on this...  There is also the new LilacSat-2 (CAS-3H) satellite with a FM transponder to try to work!So much to do, so little time...

5 Responses to “Made my first satellite QSO”