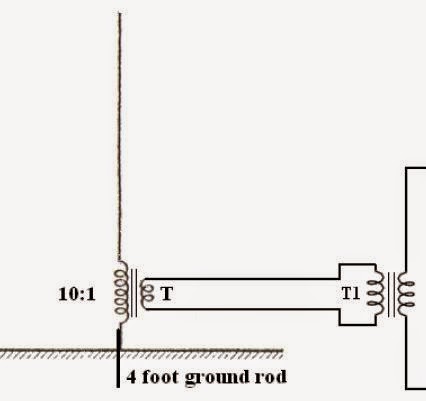 The recent posting by BCB / NDB DXer, Steve Ratzlaff (AA7U in OR), describing the poor performance of his initial LNV, prompted another round of valuable discourse on the Yahoo NDBlist Group. Steve indicated that his new 40' LNV was virtually deaf compared to his loop and active whip. ... until he rewound the transformers.

"I've fixed the very low sensitivity of my 40 foot LNV. The transformer
needed more turns for my particular setup--that made all the difference
in the world. I'm also using coax cable, not twin lead--that apparently
makes a big difference in the proper transformer turns ratio too. But
the LNV with preamp is now about the same sensitivity as the active whip.

My transformer primary uses 110 turns, to give good reactance at
the low end of the NDB band. I started with 21 turns on the secondary,
tuned to my local beacon LGD on 296 and looked at the signal level,
removing two turns each time until I got to 8 turns. A broad peak was
with 16 turns which is what I used for the final secondary turns. That's
a turns ratio of 110/16 = 6.875.

Total coax run from the mast to the middle of the home is about
135 feet where it enters the home.

I did some ground rod checks for signal level too. I have 3 ground rods
installed at the LNV--6 foot, 4 foot and a short 2 foot. I started out
with all three connected and took a reference signal reading, then just
the 6 foot; then just the 4 foot and then just the 2 foot. Signal level
dropped several tenths of a decibel for the 2 foot rod and was the same
for the 4 and 6 foot rods by themselves and for all 3 rods connected. So
my particular setup likes something a little longer than 2 feet for the
ground rod. I'll leave all three rods connected for now since they're
already in place.

The LNV being in a different location is now quieter on some lower end
signals where the active whip is noisy due to the whip being closer to
AC power--a nice thing. The low end 195-205 kHz especially are often
unusable due to noise; the LNV is much quieter for those, apparently due
to it being 100 feet farther from the AC power at the home.
So, the bottom line is my LNV is now working like it should, I believe.
I'll continue to use it and do more comparison checks since I can switch
my antennas instantly."

" ... I believe the  term low noise vertical is a bit misleading. These verticals are only suffering less from local noise compared to loop antennas when
located close to the house.
The reason is that the vertical is receiving the electric field and
the electric field of local noise sources located in the house fall
off very quickly outside the house, especially at LF and MW.
A loop antenna does receive the magnetic field of local noise
sources and this field does not fall off close to the house.
I can demonstrate this effect here any time with my modified ALA1530
and mini-whip antenna.
"Matching" this type of vertical to the 50 ohm input of a receiver
is interesting. Connecting it directly to the receiver input, will
load the antenna too much and the voltage across the antenna
terminals will collapse.
This problem can be solved by using a high input buffer amplifier as
used in active whips or by a voltage step down transformer.
Due to imperfections in the step down transformer, e.g.
inter-winding capacitance and insufficient inductance of the
receiver tap / secondary winding, signal output will be way down
compared to an active whip of the same length, using a high input
impedance buffer amplifier.
You can use a tuned vertical to overcome this, however doing so the
broad band nature of the antenna is lost.
Living close to strong broadcast stations, which prevent the use of
active antennas, this particular type of E-probe is an excellent
alternative."

And from Anthony Casorso in CO:

"Motivated by your posts, I build a new transformer using an FT140J with 100 turns on the antenna side and a 10 tap secondary with a rotary switch to select the tap. The taps were from 8 turns to 26 turns in 2 turn increments.
After playing with it for a while, I am leaving it at 10 turns which matches the original 10 to 1 ratio.  This is a tradeoff for me because I do get more output as I increase the secondary turns. The problem is that it also starts pushing my FDM-s2 SDR into overload unless I use the MW band reject filter. At the higher settings, I even get some overload with the filter, probably from strong stations near the filter edges.
Overall, the switch is much like having an adjustable attenuator. At 8 turns, the lower parts of the NDB band are just below the receiver noise floor with the resolution bandwidth I normally use so 10 seems about right.
Now that I have the switch, I can play around with it and see if there are situations where other settings work better (like on shortwave maybe)."
And finally Don, in California:

"Well, with 50% more turns (12T) on the secondary winding there is alot
more output. Around 520 kHz I was running the Perseus volume almost all
the way up - now it is about half.

I'm using ~33m 75 oHm coax from the LNV to the Perseus - no RF amp -
plenty of signal. My LNV output is about 15 - 20 dbm less according to
the Perseus than the PA0RDT and Wellbrook ALA-100 but I don't seem to be
missing any signals because of the lower "S" reading. I'm amazed that it
seems to work well so I'm trying not get tangled up in numbers. I don't
think it is possible to have a perfect match with hard wired components
and changing frequencies.

The secondary seems to need at least 8T with a 80T primary in my little
LNV experiment and 12T is better. When I get the 28ga wire I will wind a
primary of 110T to match Steve R's LNV coil with a secondary of 12T to
start with."

Of interest to note is the use by both Steve and Roelof of the  RPA-1 preamp.

" I'm using a DXE RPA-1 preamp that I've modified for flat LF response. It
has about +18 dB gain. The stock preamp rolls off gain below about 300
kHz; mine is flat down to VLF. (The input transformer needs more turns,
that's all that's needed.) "
All good information if you are contemplating your own LNV installation.
Steve McDonald, VE7SL, is a regular contributor to AmateurRadio.com and writes from British Columbia, Canada. Contact him at [email protected].