Loopstick Magic And The CR-1 Clone

This very much sought-after radio is a well engineered ‘double-tuned’ set utilizing a series-tuned antenna tank circuit coupled to a parallel-tuned detector tank. 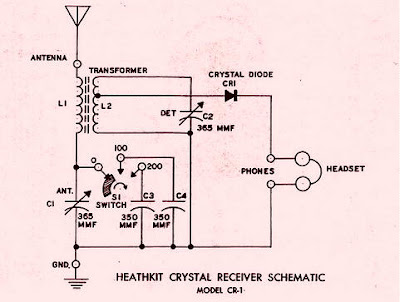 Both coils are wound on the same 1/4” diameter tubular form containing two ferrite slugs ... one for the antenna coil and one for the detector coil. The coils have been pre-wound and fixed on the form, about 20mm apart while the slugs have been waxed in place to set each inductance to the desired value.

I do wish that I'd had enough sense when I was a kid to buy myself a CR-1 as it seemed like they were dirt-cheap. 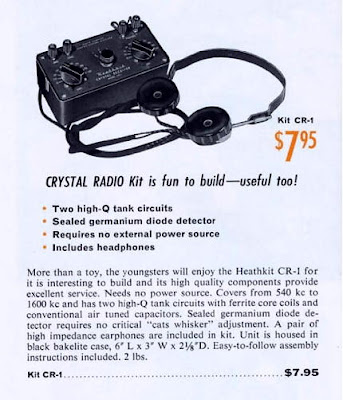 My previous experience with homebrew DX crystal radios (ones that can hear stations other than strong locals) had taught me that they required large coils and ‘hot’ diodes. The CR-1 has neither of these yet it performed exceptionally well during the few weeks of evening tests a few months ago. I was able to log 50 stations, as described in the earlier blog ... and began to see that, just maybe, requirements may not be as rigid as I had always thought, when it comes to building DX sets!

When I discovered several ‘new-in-the bag’ broadcast band ferrite loopsticks in my junk box, I realized there might be an opportunity to allow me to make something very similar to the CR-1 circuit. 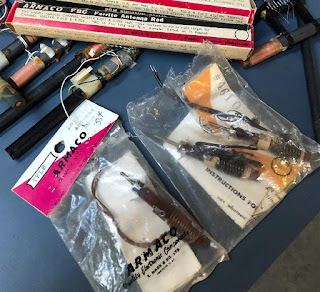 These are the same loopsticks used in the crystal ‘Rocket Radio’ of the 50s or in various transistor radios of the day. 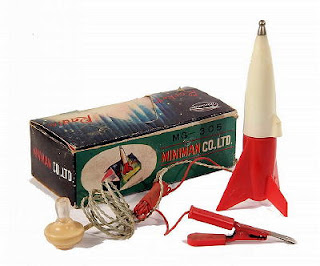 I breadboard-mounted the two loopsticks so that the distance between the antenna coil and the detector coil could be adjusted, allowing some control over coupling and selectivity ... something not available with the stationary CR-1 coils. 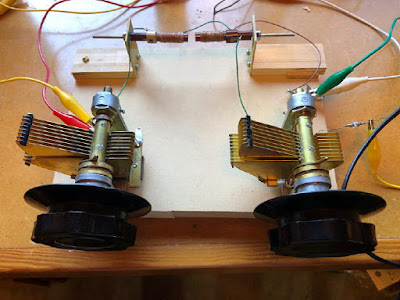 Using the same antenna, headphones and external wavetraps, proved once again the excellent performance available from a very small and simple hi-Q coil system ... a DX machine without huge coils and expensive Litz! A total of 51 stations were logged over a two-week period, one more than was heard with the CR-1 and with a few ‘almost’ heards still waiting for one of those really good propagation nights. Having the ability to adjust the coupling was very helpful and made some of the weaker stations a little easier to detect. Stations in RED are local strong signals while those in BLUE are skywave propagated DX signals: 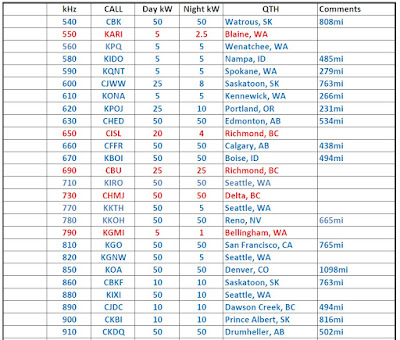 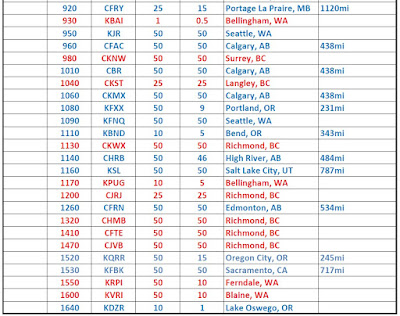 Mounting one of my old HRO 'PN' vernier dials on the main tuning capacitor provided plenty of bandspread, with each dial division corresponding to ~ 2kHz. It was very easy to locate any given frequency within the broadcast band once the dial was calibrated. 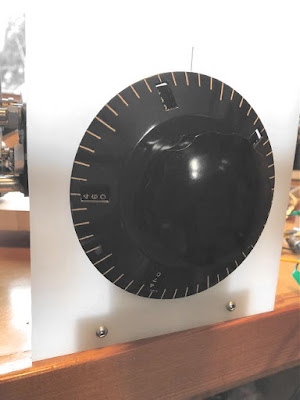 Soon after, I ran across a post by Zoltan Pap on Facebook’s ‘Crystal Set Radio Group’, describing his unique use of an old 455kHz I.F. transformer in a crystal tuner. I thought this was a rather brilliant idea and dug out an old I.F. can from the junkbox to see what it might offer. 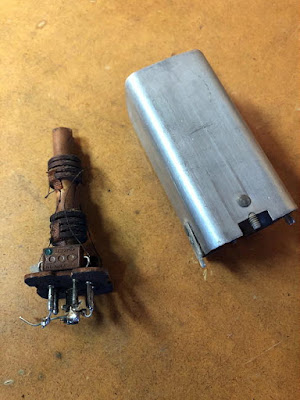 The old I.F. can had two litz-wound (10 strand) tank coils, fixed in place over two adjustable ferrite slug cores ... in reality, something very similar to the, now very difficult to find, ferrite loopsticks used above.

The two inductors measured out at ~ 700uH - 1.1mH as the slugs were tuned from one end to the other. I was aiming for something close to the inductance used in the two CR-1 tank coils ... approximately 380uH.


A sufficient number of turns were removed from both coils to yield the needed inductance and both coils on the CR-1 breadboard clone were replaced with the old I.F. can coils. 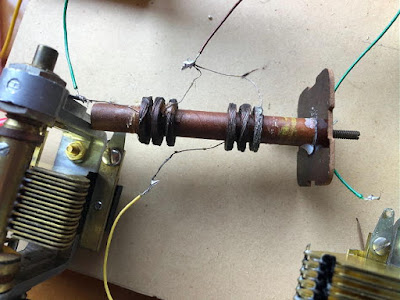 In just a few minutes of tuning through the band, it was very easy to hear and separate all 16 local stations (RED in the above log). A few hours after sunset (on a not-so-good night) yielded quick copy of KPOJ (620kHz) in Portland, Oregon (231 miles) as well as CHED (630kHz) in Edmonton, Alberta (534 miles), demonstrating that even this old 1940's I.F. can could be turned into a crystal radio DX machine!

I don't believe the 'Q' of this pair of coils is very high, compared with the smaller loopstick, as its selectivity appears to drop off above 1000kHz. I'll try separating the form into two halves so that the coupling can be adjusted. The experiment is still under way but if you want to play and can't lay your hands on the pricey loopsticks, old I.F. cans are often much easier to find and probably a lot cheaper.
Steve McDonald, VE7SL, is a regular contributor to AmateurRadio.com and writes from British Columbia, Canada. Contact him at [email protected].

2 Responses to “Loopstick Magic And The CR-1 Clone”