You might want to read Part 1 and Part 2 of this series if you haven’t already done so. 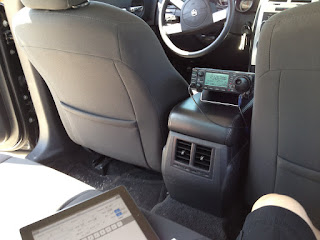 Originally, my wife Sharon and I were going to spend the full day “playing tourist” together on our last day of the trip, and I hadn’t planned on doing any additional radio operations. However, things changed and since Sharon had plans with her Mom, I decided to head back to South Lido Beach for one more day of operating. I got a much earlier start than the previous days, and set up in the same place that I did before, operating from inside the car. I was on the air at just around noon local time, but I got off to a very slow start, with only three contacts in that first half-hour. However, thanks to the magic of the packet cluster network, once I got spotted (initially by N8ZI, thanks!) things got a lot busier, and with more spots there were a lot more stations calling, who in turn spotted me again which brought another wave of stations calling. For that afternoon, ignoring the initial “slow start”, I wound working a station about every 2 minutes over the next 2 1/2 hours. Considering that in a few cases (one of which I’ll mention specifically) I stopped and chatted for several minutes, I was extremely pleased with that rate.

Unlike the previous days, the final day of operation went very smoothly, with no hitches at all. I operated entirely on 15m, and aside from some fairly deep QSB (fading) that was problematic from time to time, propagation seemed to be very good into central Europe as well as both the northeast and western United States.

One of the more memorable contacts I made was with Budd, W3FF. Budd is the “Budd” in Buddipole, and while we’ve emailed back and forth on several occasions, this was the first time we’d ever had a contact on the radio. When he first called me I had some trouble hearing him due to the previously mentioned QSB. He’d tried to work me on the previous day while “pedestrian portable” (that’s walking around with an HF radio and antenna), but I wasn’t able to hear him. For this contact, he was working from his home station, and he had to turn on his amplifier so that I could hear him more clearly. It was fun getting to speak to Budd, and after a while we finished and I went on to work more stations.

After returning home, a little quick analysis of my log showed the I made 119 contacts with 116 different stations (I worked 3 stations twice each) located in 24 different countries. As of the time that I’m writing this, I had 33 of those contacts confirmed via Logbook of The World and another dozen who send me QSL cards directly through the mail, including 3 DX stations. (I won’t see any bureau cards for at least another 6 to 12 months). With the help of my son Brett who did the design work, I was able to print out the cards needed to confirm those contacts, making sure to include both the IOTA number and island name as part of the card. (This is a requirement of the IOTA programme and and I wanted to ensure that the folks who got a card for me were able to use it for confirmation of their contact with NA-034.)

All in all, I had a great time operating, and I look forward to doing it again.