This is part 2 of this series. You might want to read Part 1 first if you haven’t already done so.

When I woke up for the second day of my operation, for some reason I had a feeling that I hadn’t remembered to pack up all my equipment the day before. I was sure that I had the radio, the antenna, and the mast, but I didn’t remember actually packing the tent stakes and guy lines. I was hoping that I’d forgotten and done that anyway, but I headed to the car to check the equipment, and found that I had indeed forgotten those small but important items. I did have some spare line with me, so the only thing I’d need to do is to figure out how to anchor that line, possibly with some rocks. I decided that I’d head to where I’d set up and figure out if maybe the missing items were still there. If not, I’d try to find a local store that sold what I needed.

When I arrived at the location where I’d set up the day before, I discovered the good news and the bad news: The good news was that the line and carabiners were lying on the ground. The bad news was that the bright-yellow tents stakes were gone. I took the line and carabiners and decided to have lunch while I mulled my options. 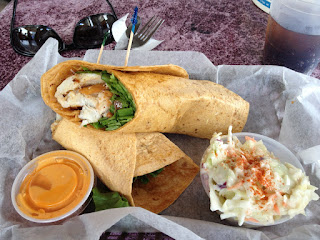 As I’ve done in the past, I headed to my favorite place for lunch, The Old Salty Dog, located just a few minutes away. As I was waiting for my blackened Grouper “Firecracker Wrap”, I used my iPhone to try to find a place that sold camping supplies. There was nothing at all nearby, with the closest place, a Wal-Mart, being over 10 miles away. I live in northern New Jersey and I’m used to traffic, but Sarasota County in the middle of the day during tourist season is awful. I figured that the amount of time that it would have taken to get the stakes and back just wasn’t worth the effort, so I tried to figure out an alternative. Thinking about how I’d set up on the first day, out in the direct sunlight, I realized that ideally I’d be able to set up where I could get a little shade. There was a section of the park where I’d set up on the previous trips that was shaded, but with the park being much busier than in the past, I couldn’t use that location. I then figured out that I could use a couple of bungee cords that I had with me to lash the mast to a fence that bordered the parking lot. I found a suitable location in the lot, with the only drawback being that there was no shade and no place to sit. (This second location is marked in green on the map in my first post of this series.) 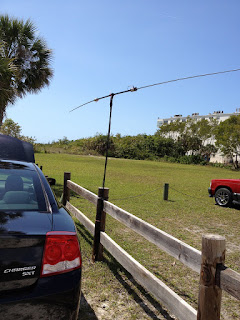 Although not as nice as sitting outside, I figured that I could set up the radio and logging computer inside the car, and with the doors open to help get a little air circulating through the car, it was pretty warm, but tolerable. To stay out of the sun, I wound up sitting in the back seat which also let me stretch out a bit. There was room for the radio on the console between the front seats, and by setting up the iPad (used for logging) and the keyboard carefully, I was able to log relatively easily while operating.

With the logistics out of the way, I decided to concentrate on 15m since the propagation seemed to be cooperating and the antenna was tuning up nicely on that band. Things started off fairly slowly, but after about an hour of operating I got spotted on the packet cluster by a few stations in Europe, and that brought in a lot more callers. Most of the time, the stations were far enough in between that I had a chance to chat a little bit with folks, but occasionally, usually after getting spotted, I’d have 3 or 4 stations call in at once. While hardly a pileup by most standards, I really enjoy working hard to pull individual callsigns out to work the stations. What was particularly enjoyable for me was being able to help out stations who needed NA-034 either for an “all-time” new IOTA entity, or to increase their scores for the IOTA Marathon event sponsored by Radio Society of Great Britain.

Unfortunately, because of the time spent trying to figure out how to set things up, (and of course the all-important lunch), I only wound up being on the air for about 90 minutes that day. I made about 35 contacts during that time, so for a lightweight, low-power operation I was very happy.