Dedicated LFer, K2ORS (Warren), posted a short video yesterday of his friend's  attempted 'pre-antenna launch' test flight: "Attempted to use an 8 rotor U.A.V, to lift a string over the trees with which an antenna wire could be pulled up. However, there were some control issues..."
I'm not sure exactly what went wrong but I hope that beautiful machine was not damaged too heavily.
I've seen a few others using inexpensive quadcopters to get light strings up and over trees and it seems that they would be ideal for such tasks. As these devices flood the hobby-market, their prices seem to be dropping quickly and more and more amateurs are looking at these with antennas in mind.
Over the years I have tried numerous methods of getting a string up and over...slingshots, fishing rods... but nothing seemed to get me past the 35'- 40' mark, if that high. Maybe it was just poor technique on my part as others claim to have good success with these methods. Eventually I decided to try a homebrew 'spud gun' as I needed to get wires up to the top of my 70' Balsam. 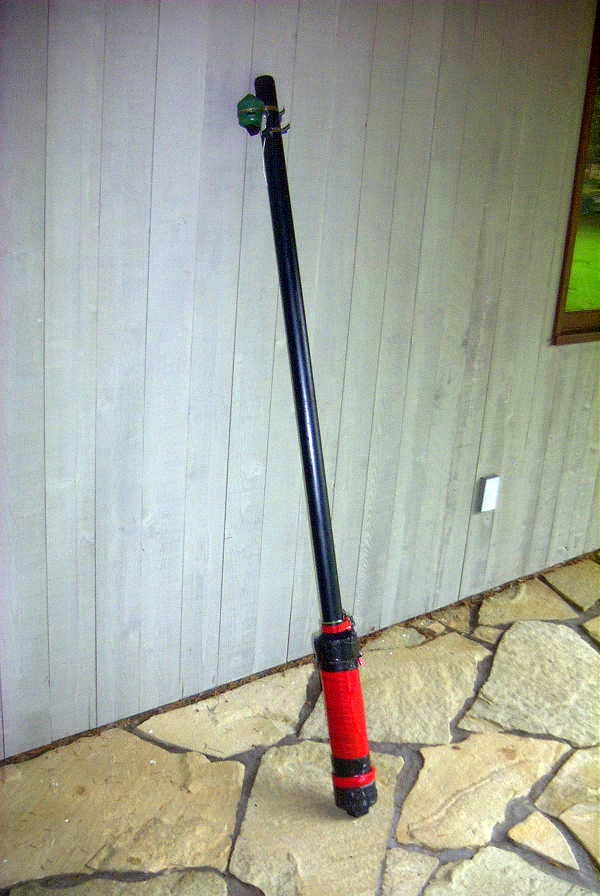 I used Schedule 40 ABS pipe, the thick-walled stuff. This is becoming harder to find in the typical hardware outlets as most of it seems to be the lighter foam-core material which should not be used for this.

When I first fired it, I wrapped the breech in several layers of towelling, just in case it blew apart but felt confident enough to remove it after a few test shots.

There are several websites describing spud gun construction and a quick Google-search will bring up some interesting plans. My system pretty much follows this design, found here at spudgunner.com.

The first propellant that I used was hair spray but found that it quickly built-up a layer of sticky-goo on the inside of the cleanout cap and threads, making it very hard to unscrew the cap. I cleaned it thoroughly and changed to Right Guard spray deodorant which worked extremely well, was very clean burning and left no residue.

The first few times I fired the gun I was shocked to hear how loud it was, with a loud 'BOOM' reverberating around the neighbourhood. After a few shots, I fully expected to see the local RCMP arriving but when enquiring a few doors away, I was told that they had not heard anything! Perhaps it is because the thing is right beside you at the time that makes it sound so loud but I have never had any enquiries about it.

I have mounted an inexpensive (Walmart) spinning reel at the very top which has been loaded with a light (10lb) mono filament fishing line. This is attached to a homebrew lathe-turned wooden bullet, about 8" long, as shown below. 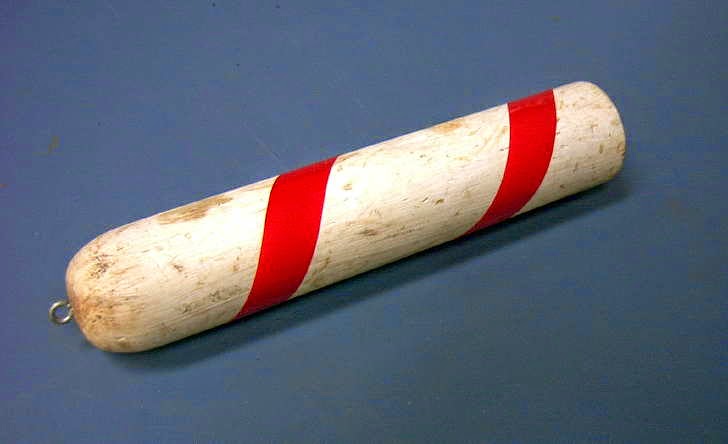 The bullet is lowered down the barrel to a peg mounted just above the firing-chamber. Once fired, it pulls line off of the spinning reel, hopefully to land on the ground on the other side of the tree. The initial attempt at launching the line over my 70' Balsam resulted in a perfect shot, but about 100' above the tree! The bullet pulled all of the line from the reel and snapped off. I eventually found it on the beach in a small bay about four properties to my south...oops.
I then backed-off on the amount of propellant and found that just a short one-second squirt was enough for a more controlled launch. It took me a few shots to get the feel of the launcher and compensating for the light wind. It is best to do this when there is no wind at all is it doesn't take much to blow the line and bullet slightly off course.

I have since used the gun many times, both here and at other ham's locations, to fire lines very high. It has always worked very well.

Should you choose to build something similar, be sure to build with caution and follow any safety instructions noted on the various websites. Most importantly, be sure to use the proper material.

Editor's Note: Using a combustion gun is inherently dangerous and can result in serious injury or death. Using the wrong materials, especially, can put the operator at risk. We cannot be responsible for personal injury or property damage resulting from use (or misuse).
Steve McDonald, VE7SL, is a regular contributor to AmateurRadio.com and writes from British Columbia, Canada. Contact him at [email protected].