Last Activation of the Year

30 December 2013 | by Mike AD5A  |  Share |  Tweet |  Leave a Comment (0)
Previously I posted the story about my Christmas Eve Activation to Montoso Peak. On Christmas Day my youngest son, Jake, KB5SKN, and his family came to Santa Fe to stay for a few days. Jake enjoys getting out into the mountains just like I do, so one of our planned days was for skiing and the other for doing a SOTA summit.

The Summit we chose was 7472. In the SOTA world, peaks without names are assigned their elevation as a name, so as you might guess the elevation of this peak was 7,472 feet ASL. The peak is located in the Caja del Rio area that I described in my previous post. the summit is actually half of an extinct volcano. As you would expect, there was lots of volcanic rock and cactus on the mountain.

The GPS route estimated that it would take us an hour get to the summit. However, because of deep ruts in the 4WD roads it took us about an hour and a half to get to the base of the mountain. This summit, like Montoso Peak, had no trail to the top, we would have to bushwhack our way up. Also, because the approach to the summit was from the north side of the mountain, there was much more snow than we planned for. However, Jake and I made relatively good time up the mountain, scaling the 500 foot ascent over .8 of a mile in about 30 minutes. 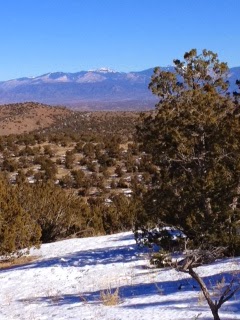 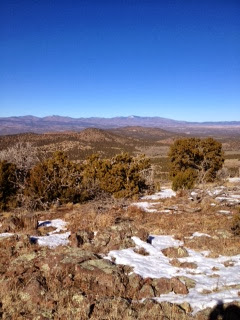 View from the top of 7472
We saw a lot of wildlife tracks on the way up, including Bear and Elk. The tracks were probably a day old however so we actually saw no wildlife. There are sufficient trees on the summit to hang antennas, so the first order of business on the summit was to hang the antenna, a 20m/40m EFHW. Because Jake's CW is a little rusty, I took the FT-817 for him to be able to do SSB. I used the internally battery, which supplies about 9.5 volts, so we would be operating with about 3 watts of power.
I started out on CW and things were a little slow until WA2USA told me I was on the same frequency as NI0G, so I move up a couple of KC's and things got much better. 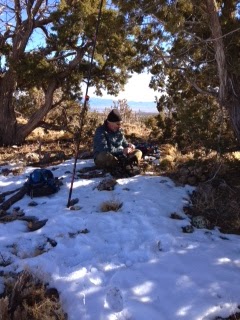 AD5A Operating, Fishing Pole in the foreground
Then it was Jake's turn to operate SSB. I am always amazed at how well QRP does from these summits. After being spotted Jake had a nice pile-up and worked 13 stations, coast to coast, in short order. 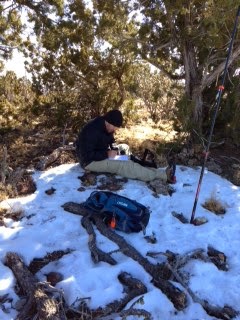 KB5SKN Operating
After a few unanswered CQ's, I took over on CW and made several more contacts on 40m and 20m.
In total I had 21 QSO's and Jake had 13. Not a bad father/son outing.
The trip down was actually made a little easier by the snow, which was deep enough to cover the volcanic rocks. 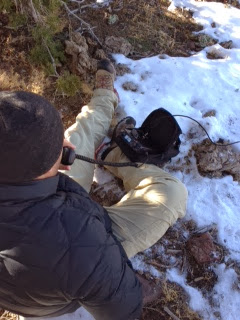 FT-817 in special pack from AMP-3
Below is the GPS track of our trip. 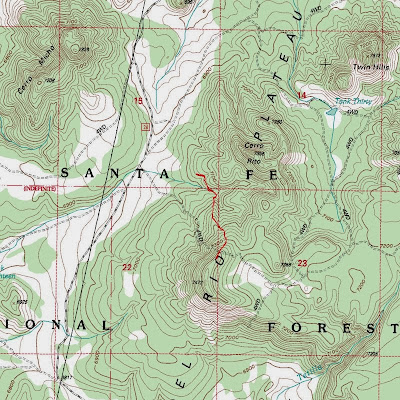 Happy New Year to everyone.
Mike Crownover, AD5A, is a regular contributor to AmateurRadio.com and writes from Texas, USA. Contact him at [email protected].