Last week when I posted about using the new dual-mode version of WSJT-X I mentioned a utility I had used to put my Elecraft K3 into split mode before starting WSJT-X and returning it to normal operation after finishing. I’ve been asked to share information about it, so here you are.

The utility is called KRun, from K-Run. K for Elecraft radios (K2, K3 etc.) and Run because you use it to run another program. It was written to use with my Elecraft transceivers but I see no reason why it should not work with other radios that use a similar CAT command syntax such as Kenwoods. Don’t ask me if it can  be used with your Yaesu or Icom radios because I know nothing at all about their command format.

If you run the utility it puts up a window listing its command line parameters. An example invocation is: 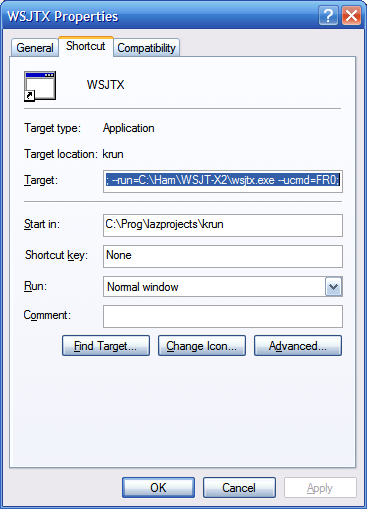 You can download KRun as a zip file which contains KRun.exe, the utility itself, and WSJTX, a shortcut configured as described above. If you try to use the provided shortcut instead of creating one from scratch yourself you will need to change the program paths to suit your own system.

So there you are. It works for me so hopefully it will work for you. If it doesn’t then a better solution would be to persuade K1JT to add these CAT commands to WSJT-X!