I had not been a big fan of Field Day for many years until last year.  Although ARRL technically terms it “an operating event,” it has most of the features and flavor of a contest.  But, the bands are crowded, there are a few more drunks and lids than your standard contest.  Your local club thinks it’s a great idea to put up a tower and an ancient tribander, but they only do a half-witted job of it making a lot of work for something that could have been smoked by a doublet in the trees. Or, you show up at a random Field Day site, introduce yourself, and offer to operate CW—only to be handed a J-38 or a blank stare.

Last year was different.  Sarah’s branch chief at work is a ham and she’s married to a ham.  Somehow, it came up that I was a ham and soon we had an invitation to Field Day at her mother’s place near the water of the Chesapeake Bay on Maryland’s Eastern Shore.  I was reluctant, but they assured me it would be OK.  They have a tower trailer for a triband Yagi and trees for dipoles on the low bands and they operate 1A.  It was fun.  Sarah enjoyed herself, too, which is a welcome change for a ham radio event!

For a variety of reasons (namely the impending birth of our first child), we elected not to go to the Eastern Shore this year.  After talking to a few guys at the PVRC/W3LPL open house last weekend who implored me to come to their operation (W3AO, the FD of epic proportions) instead, I decided I needed to do something.  Since W3AO was making a run on the all-time Field Day high score record this year, I opted to make a game of running 1D and working W3AO (and their GOTA station, KE3Q) on every band and mode available.  The goal was to not disrupt our weekend too much and to have fun, possibly contending for a plaque offered by PVRC for the most band/mode QSOs with W3AO/KE3Q. 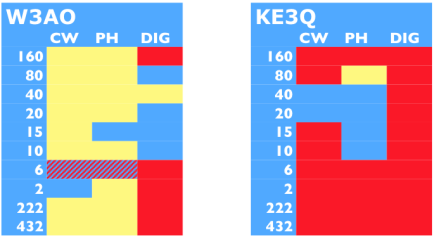 So, I did pretty well with W3AO, all things considered.  I was not QRV on RTTY until Sunday morning (forgot that I did not set that up on the “new” PC yet).  By that time, I missed the really good opportunities to work them on 20 and 80.  I don’t know if I ever would have on 15 and 10.  I did see them spotted on PSK31 (a mode I will never enjoy—one QSO was enough) on 15, but could not hear (erm, see) them here.

It was a bummer not to have 6 meters here and despite 3-4 requests, the 2-meter phone operator(s) refused to QSY to CW with me, even though one told me I was his first QSO in an hour!  It did take almost 10 minutes for them to find a key to work me on 222 and 432 CW!  Thanks for going the extra mile!  I believe my total of 17 QSOs ties K3DI’s record, plus one more with KE3Q, for 18 total.

I worked KE3Q right away on 75 meters, but never heard them again.  I did see QRS Skimmer spots for them on 40 and 20 CW in the middle of the night and at the very end of event, respectively.  But, I do not believe they were QRV on CW on any other bands.

Having 6 meters and digital from the start probably could have increased my totals a bit.  A satellite QSO or two would also have been good.  But, I did not have it in me to get that set up in addition to building microwave gear and getting the baby’s room ready.  Plus the 432-MHz amp I bought recently has been held hostage by the deadlock between Canada Post and their workers.  So, I only have 10 watts on that band until that arrives, making the annual Field Day “Battle for Bandwidth on the Birds” that much more exciting with a small antenna oriented for terrestrial work.

It was a good time, although I think I’ll be itching to go out into the “field” again next year…thanks for the QSOs and the QSYs!