12 May 2015 | by Larry W2LJ  |  Share |  Tweet |  Leave a Comment (3)
As much as I hate to do it, I need to look for a new laptop for the shack. A few months ago, when the family computer gave up the ghost, I pressed my shack desktop into service in that role.  To fill the void in the shack, I resurrected my old Acer Inspire One netbook. It's a small machine with a very small screen, with hardly any processor power. It was performing duties way beyond its pay grade. This is the kind of computer that was designed for looking at e-mails and Facebook, and that's about it. Needing something better, I tried recruiting my even older HP laptop (the one with the broken top lid hinges - thanks, kids!) into service. Alas, it's better than the Acer, but only by the breadth of a hair.  It has a bigger screen, more RAM and a bigger hard drive, but it's still an old XP machine that has grown long in the tooth.

To explain what I mean ..... I went down to the shack last night to add some entries to my main logging program from the HamLog app I use when operating portable. I flipped the on switch at 9:30 PM and by the time it had booted up and the logging program had loaded it was about 9:47 PM.  17 minutes is not good. I wanted to start pulling out my hair by then. I think watching paint dry, or grass grow would have been less stressful and more entertaining.

That exercise in frustration drove me to start searching the Web. At work, IBM issued me a Lenovo T410.  I still use this model every day. Yes, they are slowly being refreshed out with the newer T440 model, but mine has served me decently well at the job over the last few years. I have found a couple places where I can pick up a refurbed T410 with 4G of RAM, a 250 GB hard drive and Windows 7 Professional in the $150 neighborhood. 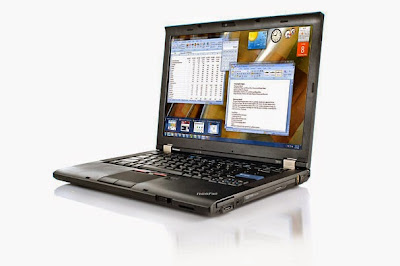 This model has everything I would need. It can hook up to the Internet wirelessly, it has 3 USB ports (need one for the KX3, one for a mouse, and one for an external keyboard), provisions for adding a second VGA monitor and the standard audio ports, so I can do the digital modes, should I ever be inclined to go down that road. Not planning to go there, but you never know. I'll have to dip into savings to acquire one, but having a computer in the shack has almost become a necessity.

Of course, I could always go native and log strictly with paper and pencil, but I don't think the ARRL would accept mailed in Xerox copies of my log for LoTW.  Also, I like to keep my eye on QRPSPOTS as well as SOTAWatcher.  Can't do that without some kind of computer, although I guess I could always just use my cell phone for those. And having a Telnet DX Cluster at my disposal for confirming that I correctly copied the call of that DX station who was sending at a blistering 45 WPM is a nice thing to have, too. (Was that an "H", or a "5" ? - 37 years of Hamming and my ears still wig out on those two, at times.)

This is another occasion where I'll just have to bite the bullet and take the plunge.  Good thing I wasn't planning on going to Dayton.

Oh, and by the way, as long as I mentioned Dayton .... best wishes to all those heading to Ohio for FDIM and Hamvention. May the weather be good, the traffic light and travelling conditions safe - there and back!