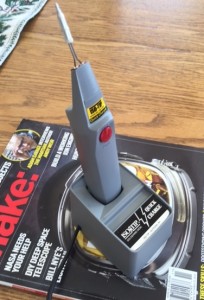 I recently had the opportunity to try out a new ISO-TIP 7700 soldering iron. This is a rechargeable soldering iron without a lot of extra features but it is plenty capable for small soldering tasks. Here’s a few specs from the ISO-TIP web site:

MODEL #7700
– Fully recharges in 3.5 to 4.0 hours
– Partially charged battery to full capacity in one to two hours
– Up to 125 soldering joints per charge during continuous use
– Withstands high-rate charging without damage
I’ve been on the lookout for a simple construction project for our local radio club and had acquired a Blinkey Kit from rainbowkits.com. This is a simple two-LED flasher circuit using the venerable 555 timer. I decided it was also a great little project to try out the 7700 soldering iron. Assembly was very simple, requiring 24 solder joints. The iron did a find job of heating up those joints. It takes about 2 to 3 seconds for the tip to heat up, plenty fast for my needs. 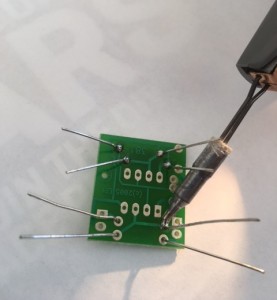 The soldering iron performed well, no complaints at all. With only 24 joints to solder, I did not stress the capacity of the iron (which is rated at 125 joints). This is a relatively light duty iron, so I wondered how well it would do against a physically large soldering task. Soldering a PL-259 coaxial connector is a common task for amateur radio work, one that takes a lot of heat. I was surprised to find that the 7700 was able to heat up the center pin of the connector quite nicely. I was not surprised that it struggled with heating the body of the connector. I think that is asking too much of this size soldering iron. The only nit I would pick is I’d really like a LED power/charging indicator. I am always nervous about whether a device is plugged in, getting power, really charging and a simple indicator would solve that. But that is a very minor issue and probably speaks more about my personal paranoia than the soldering iron.
This iron has quickly become my “Go To” tool for quick soldering jobs. I don’t do major kit assembly and other big soldering tasks. I just need a little soldering here and there and this baby is always in the charging stand ready to go. To order the soldering iron (and see other products), visit http://www.iso-tip.com/products-page/
Use discount code YT1510 to get 10% off store wide.
73, Bob K0NR
Disclosure: this soldering iron was provided to me by ISO-TIP at no charge.