Is is wise to buy your wife an appliance for Christmas…..maybe!! 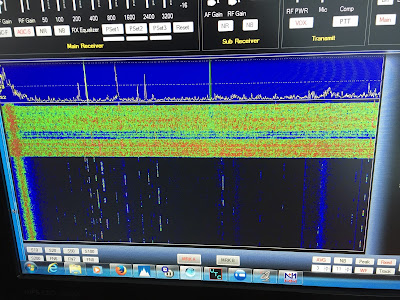 I was operating in the CQ WW CW contest the other weekend and all was going well. I left my operating  post for a short time and came back to see my P3 screen shown in the above shot. I was not sure what was going on but I did know it was wiping out the entire band. In an instant the CW WW CW contest I was in was on hold. After a very short time I found out it was the mixer my wife was using to make some holiday short bread cookies. I showed my wife and once the short bread mixing was done I was back in the contest again.  I thought I would never say it but "I think it wise to buy my wife an appliance for Christmas. Truth be told I think I am buying it for myself.
Mike Weir, VE9KK, is a regular contributor to AmateurRadio.com and writes from New Brunswick, Canada. Contact him at [email protected].