Ionosondes, the “Fish Finders” of the Ionosphere, and How Ham Radio Can Help Advance Ionospheric Science

An ionosonde is a portmanteau for “ionospheric sounder,” instruments managed by educational, government, military and scientific agencies around the world to monitor and measure the ionosphere. You can think of Ionosondes as “fish finders” that find, instead of schools of fish, regions of electrons and electrically charged atoms and molecules in the upper atmosphere.

The first ionosondes were invented in the 1920s, grew in sophistication during the 1930s, and were used by both sides during WWII to identify the best shortwave communication frequencies. A thorough history of ionosondes written in 1998 by Dr.Klaus Bibl is downloaded in PDF from the Annals of Geophysics Website here:

Ionosonde systems incorporate a transmitter tunable from as low as 500-kHz to as high at 40-MHz (1.6 to 12-MHz sweeps are a more typical range), antennas usually pointed straight up, and a receiver that tracks the transmitter listening for echoes reflected back to earth. It is, in other words, a radar system.

Ionospheric weather, like tropospheric weather closer to earth, is in constant flux. The global ionosonde network is periodically mapping the ionosphere measuring the highest frequency reflected back to earth (this is Fc, the critical frequency) and at what height above earth that occurs (which reveals which ionospheric layer is in play). The critical frequency is proportional to charged particle density in each ionospheric layer. Signals at frequencies above Fc at the F2 layer (highest ionospheric layer) continue off into space instead of coming back to earth. Here is an example of an ionosonde ionogram (vertical axis is km above ground, horizontal axis is frequency in MHz): 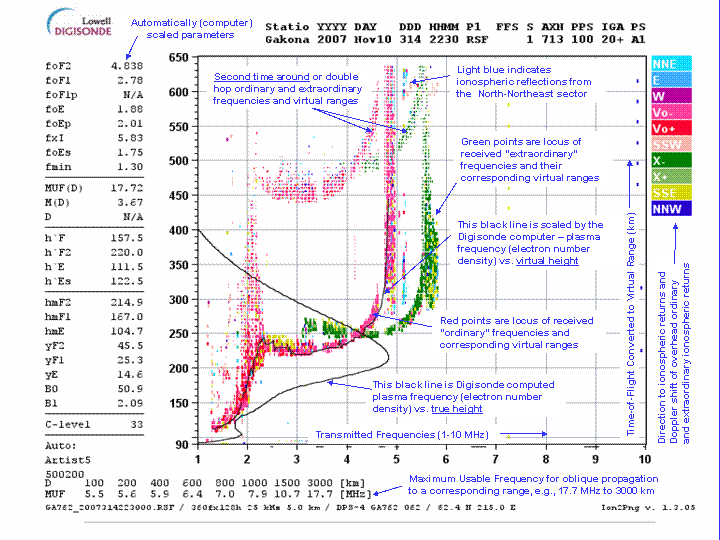 Knowing the critical frequency at various points around the world enables calculation of MUF (Maximum Usable Frequency) for shortwave radio broadcast and two-way radio communication in those regions. A useful rule of thumb is the MUF will be around three times the Fc. So, for a Fc of 6.2-MHz the MUF for signals transiting that region of the ionosphere would be around 18.7-MHz. In such conditions, the amateur 17-meter band, centered on 18.1-MHz, would be a great choice for long distance communication, as would the 20-meter band (14-MHz). The 15-meter band (21 MHz), on the other hand, would likely be ‘dead’ for paths across that region.

Q: why is the MUF so much higher than the Fc? A: radio waves propagated over long distances are refracted (bent) back to earth at acute angles, not ‘bounced’ back to earth like a handball off a wall. Less ionization is needed for refraction at low angles than for a return of a signal transmitted straight up.

How many ionosondes are in regular operation around the world and are reporting their data publicly? Best I can tell, it’s something around one hundred. The UK Solar System Data Centre has an interactive map (reproduced below) with data on each site, more info at www.ukssdc.ac.uk/wdcc1/ionosondes/world.html.

A hundred ionosondes (+/-) is ‘not nothing,’ however, the world’s a big place, and there are large ionospheric regions going unmapped by the ionosonde network. That’s where ham radio comes to the party.

The number of amateur radio operators communicating long distances over shortwave on any given day vastly outnumbers active ionosondes by orders of magnitude. Two of the most popular ham activities are contesting, making as many contacts with as many other hams in as many countries as possible in a given period, typically over a weekend, and DXing, contacting as many countries as possible in one’s lifetime during or outside of contests, the more obscure and hard-to-contact, the better.

“Contesters” and “DXers,” which are not mutually exclusive groups, tend to be very knowledgeable about radio propagation from their own extensive observations. Knowing what bands to operate on and at what times given the current state of the ionosphere can give a contester a winning edge or help a DXer snag an elusive country.

Hams have developed several innovative tools to collect, correlate and analyze the large number of ionospheric observations taking place on the ham bands every day. Every successful contact, a “QSO’ in ham-speak, is a data point. The American Radio Relay League’s Logbook of the World database is closing in on a billion QSO records from over 80,000 contributors! More data = better science.

Part 2 of this Blog will discuss two of the ways hams are collecting and analyzing ham radio-generated ionospheric propagation data in real-time: RBN, the Reverse Beacon Network, and DXmaps.com.
Part 3 will describe the RBN Node @ WØLFA.