23 May 2016 | by Andrew MØNRD  |  Share |  Tweet |  Leave a Comment (0)
I have been lacking the ability to operate on the lower HF bands, while my small 'multi-band' OCFD could be used on 40m trying to use it on 80m was nigh on impossible with my ATU. As you would expect even if matched for a useable VSWR the actual performance has been compromised.

I needed a cheap and relatively unobtrusive solution and I found one in Len Paget's (GM0ONX) design for an inverted L. The full details were printed in the Practical Wireless magazine several years ago and PDFs are available for download from Len's website. The designs make use of coaxial traps, one for the 80m version, two if you want to add a top-band (160m) option.

Opting for the smaller 80m version I set about building one. Using an old fibre-glass fishing pole about 5m high at the far end of the garden tucked behind the summer house which I could collapse down and then retract the wire elements when not in use so hiding it from view.

The fun and interesting part was building the trap. They are formed by coiling some coax, in this case RG58, round a former such as plastic waste pipe. I had a bit of scrap pipe but it was 32mm not the 40mm diameter type described in the article, thinking it couldn't make 'that much difference' I built one using the same number of turns but the resultant antenna wasn't anywhere near resonant according to the analyser.

I decided I needed to test the trap's frequency response. I found a YouTube video by Dave Tadlock (KG0ZZ) where he demonstrates using a MFJ 'Grid Dip Meter' adapter on an MFJ antenna analyser to test coaxial traps.

The adapter consists of nothing more than a coil of wire on a suitable former so I made my own to use with my AW07A analyser. It worked a treat and I discovered my trap was way off frequency. In the mean time I had located a useful PDF document by David Reynolds (G3ZPF) which informed me I actually needed 180cm of RG58 round a 32mm pipe to make a suitable 7MHz trap, so I made another.

I made a small video showing the traps and how I tested them.


The resulting antenna seems to perform well, but it does sag a little due to the weight of the trap and wire and the flimsiness of the pole. But I have made a number of contacts on it and used it during the RSGB 80m CC Datamode contest a few weeks back. It was my first go at this contest but once I got the hang of operating it was great fun. 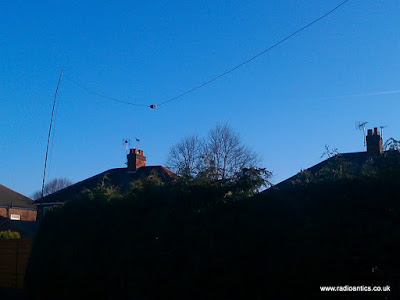