During the middle of the day here 30m becomes virtually dead and there is nothing to see on HF APRS. I decided to try some digital modes. After a quick tune around I couldn’t hear any digital apart from PSK. These days, if there’s propagation there is PSK activity.

I had quick listen on 15m and even spotted a couple of stations to PSK Reporter, but signals were really weak so I dropped down to 17m. On 17m I have to use the MFJ magnetic loop, which I needed to re-tune from 30m. As I did so I was startled by a loud buzz from the Kenwood TM-D710 on the VHF APRS channel. I turned the volume down, suspecting a spurious but not knowing if it was the fault of the K3 or the Kenwood. 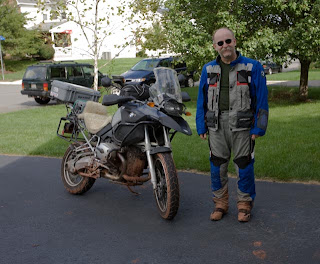 I made several European contacts using PSK31 before lunch including Veljo, ES0OU on Saaremaa Island, which is IOTA EU-034. None of my contacts wanted chat, though you have to realize that English is not the first language for any of these stations, if they speak it at all. I suppose here in Europe we have to be thankful for macros.

After lunch I walked into town with Olga. On my return the receiver was still on 17m and had spotted a long list of stations to PSK Reporter. KU1T, Zibi from Glengary, WV (pictured above) was one of those spotted. I waited and eventually saw his trace appear on the screen. I gave him a call and he replied. Copy was in and out of QSB so it was one of those contacts where a conversation would not have been possible. KComm told me this was my first USA contact on 17m.

Later, a few seconds with the calculator revealed the reason for the strong interference with the VHF APRS frequency. 18.100MHz, the carrier frequency used when operating in the 17m PSK31 band segment, is exactly one eighth of 144.800MHz!