If you are a new visitor who found my site via my letter in the May Practical Wireless (PW) welcome to my blog! 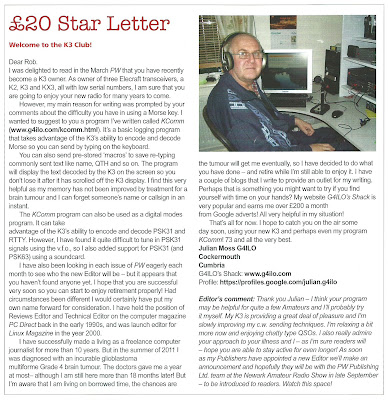 What’s this all about? In the March 2013 issue of PW the editor Rob, G3XFD, happened to mention that he had just taken delivery of a new Elecraft K3 or, as he put it, “joined the K3 Klub”. He also mentioned the difficulty he had in using a morse key due to disability. I sent an email to Rob welcoming him to the K3 owners’ fraternity, and mentioned that he might like to try my simple logging program KComm written specifically for Elecraft radios which allows you to send Morse from the computer keyboard using a built-in capability that Elecraft rigs have.

Rob also wrote of his pending retirement once they had found a new editor to take his place, so I mentioned that it was a position I would have been interested in myself if circumstances had been different. I have been technical editor of a computer magazine, launch editor of a Linux magazine and had made a living successfully as a freelance writer for best part of 20 years so I was probably quite well qualified for the job. It would have been exactly the right move for me at that point in my career, something I would have enjoyed doing, I could even have worked from home, but my health disqualified me from serious consideration of it. I said as much in my email to Rob.

I forgot about the email until a few weeks later when I received an email from Rob asking permission to publish an edited version of it in the next issue of PW. I hadn’t expected that but agreed to it and also sent a picture of me in my shack. I was quite surprised when my letter appeared almost word for word as I had originally written it. I was even more surprised to find it was the star letter for that month! I hope you found it interesting. I’m sure the £20 when I receive it will be put to good use!