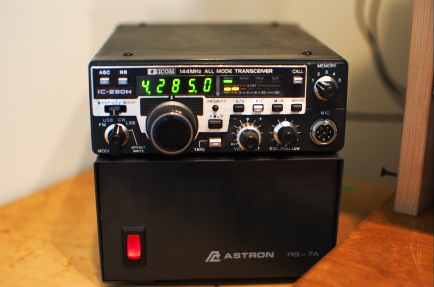 Some time back, I had the good fortune to stumble across a broken IC-290H at an attractive price.  The IC-290H is a synthesized mid-1980s 25-watt 2-meter all-mode transceiver.  Since I had been contemplating a radio to use as the IF to my W1GHZ transverters for 903 through 3456 (yeah, still need to build/integrate all of these), I jumped.  The problem was described as an offset of some tens of kHz between the dial frequency and the actual transmit and receive frequencies.  Since the IC-290 lacks a user community like the TS-600 and TS-700 (my other 2-meter all-mode radio), I went to Google and then posted a quick inquiry on the Stanford VHF e-mail list to see if this was a common problem.  Google produced nothing and the VHF list produced the usual “get the Service Manual” response.  Since I already had the Service Manual thanks to the previous owner, I was set. 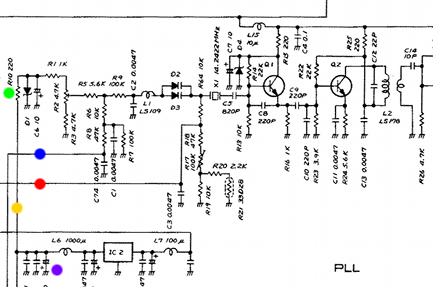 The synthesizer (“PLL”) in the IC-290H has at its heart a VCXO (shown above).  The control voltage biases varactor diodes D2 and D3 in a tank circuit with crystal X1 operated between the series and parallel resonant frequencies (as a very high-Q inductor).  Contributions to the control voltage come from the microprocessor (red dot), the receive incremental tuning (RIT, blue dot), and an overall bias of -9 V derived from 5 V using DC-DC converter IC2.

In the “PLL Adjustments” section of the Service Manual, the VCXO adjustments are outlined, checking the synthesizer output with a frequency counter.  I noted that as I changed rotated the VFO encoder on the front of the radio and the digits changed on the display, the output frequency of the synthesizer changed accordingly.  Similarly, the RIT caused the frequency to shift.  Neither of these things were surprising since I could tune in different stations before.  In USB mode at 145.998.5 MHz, the synthesizer should output at 134.250.0 MHz.  I read it at 134.230.21 MHz, clearly the source of the almost 20-kHz offset.  I nudged potentiometer R2 (against the vehement warnings of the Service Manual) and the output didn’t change.  For good measure, I swept R2 over its entire extent with no change.

R2, it seems, controls amount of the available -9 V bias applied to the varactors.  I checked the -9 volts line.  Zero.  Who stole the bias from the cookie jar?  The 5 V line was sagging down to 4.23 V.

I removed IC2, which is in a metal can that resembles an overgrown Mini-Circuits mixer and has only “DP-1″ stamped on the cover in black ink.  For kicks, I drove this little guy with 5 volts into no load and got well over -100 V out.  Did this punk destroy other parts in my synthesizer?  I put this question to Dad, who happened to be here over the weekend.  He suggested that it might require a load to produce a regulated output.  Good thinking.  Nothing on the synthesizer board appeared to be charred.  So, my theory was unlikely and I proceeded.

Without IC2, the 5 V line bounced up to 4.95 V.  And, the output side (connected to L6) showed a DC short to ground.  If you trace the circuit from the output of IC2 to one of the legs of R2, nothing should show a DC short.  I looked for bridged solder traces.  None.  Taking the divide an conquer approach, I removed R10 (green dot), to isolate the entire RF portion of the circuit.  Still shorted.  So, this left the following three suspects:  two 0.1 uF ceramic disk capacitors and a 10 V, 100 uF electrolytic.  Since electrolytic capacitors, especially older ones, have a bad reputation for causing problems, I interrogated it first (C20, purple dot).  Bingo.

The only 100 uF capactor I had on hand that even came close to fitting was a 50 V unit from a previous repair.  I squeezed it in—it’s the big brown one against the edge of the case in the center of the photo below.  Note IC2 “DP-1″ in the lower right corner. 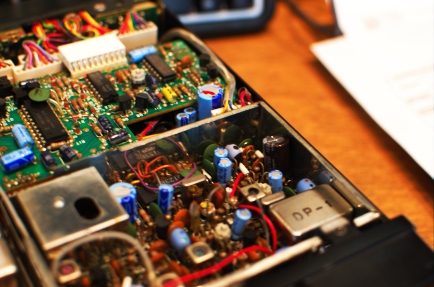 So, I plugged the radio into a power supply and antenna.  And, low and behold…it was about back on frequency.  So, I completed the synthesizer and RIT adjustments in the Service Manual and put it back together.  It actually receives WA1ZMS/B on 145.285.0, which, Doppler notwithstanding, is GPS-locked at 145.285.000…   Stay tuned for the low-drive transverter IF modification in the next few months once I start building them again.