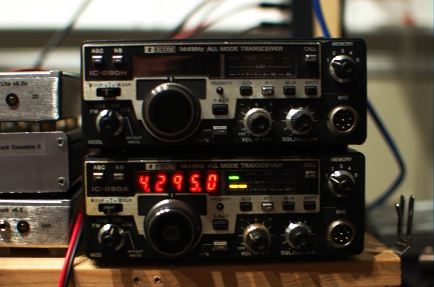 Regular readers know that I enjoy a good deal on a good project and just such an opportunity presented itself again recently, this time in the form of an Icom IC-290A, which is a 10-watt 144-MHz all-mode transceiver whose age rivals my own.  It was from a large estate of much more valuable (think solid-state HF kilowatt, etc) items and the sellers were probably just happy to unload it since the display would come up at first but then disappear after a few minutes.  After cleaning a film of nicotine residue off of case and knobs, I set to work diagnosing the problem.

I tuned into the two beacons that I can always hear:  W3APL/B on 144.295 and WA1ZMS/B on 144.285.  They sounded just as good as they did on the TS-700, the IC-290H, and the borrowed FT-736R.  Then, the display went blank.  But, I was tuned into WA1ZMS and I could still hear it just fine.  Turning the main dial no longer changed the frequency.  When I turned the radio off and back on, a clicking noise emanated from the speaker above the background hiss, but there was no receive and no display.  Disconnecting the power supply and allowing the radio to sit for a few minutes restored normal operation…until the display blanked again.  This seemed to me to be a thermal problem, perhaps a bad capacitor or two as I had found in a IC-290H obtained on similar terms.

I popped the cover off of the radio and immediately noticed a few dry/cold/oxidized solder joints on the “Sensor Unit” board that sits on the top of the radio behind the front panel.

In each case, the bad joints were associated with electrolytic capacitors.  I desoldered all of them, cleaned the pads, and replaced the capacitors with new units.  It was somewhat of a miracle that I had all of them in my junkbox.

The problem persisted and for a while I thought it was getting worse.  For good measure, I went through all of the boards looking for leaky capacitors and cold solder joints and found nothing.  The “Troubleshooting” section of the Service Manual was an abject waste of pulp, but I did go through it.  The “PLL” (synthesizer) alignment section yielded no clues except that the reference oscillator (6.070 MHz nominally) level was a tad bit low in amplitude.  I heeded the warning of the manual that it had been carefully adjusted at the factory and should not need adjustment.  When the radio arrived, it was missing a number of case screws, suggesting that someone else had been inside.  So, who knows what the Golden Screwdriver hath wrought!

After reseating the row of connectors at the front of the “Logic/PLL” board just behind the radio’s front panel, I noticed that the problem seemed to have vanished.  It has not failed yet since doing that and replacing the Sensor board capacitors.  I hooked the radio up to a Bird Termaline wattmeter borrowed from W3APL and it made 10 watts on FM and CW.  The needle barely moved on a 10-watt full scale in USB.  So, I need to verify if it’s the microphone or the radio.  My new plan is to use this radio as the microwave IF and keep the more-powerful IC-290H for liaison and other portable purposes.  So, USB operation is critical.

So, like I always say, it seems that there are a lot of repairs that can be done just by cleaning things up.  I’m not totally satisfied with the technical explanation of why reseating those connectors seemed to have fixed the problem.  But, that is what happened and it is consistent with a lack of communication between the encoder/display unit in the front of the radio and the microprocessor in the logic unit.  It seems to be working for now!