I never expected I would shake the hand of an astronaut: Meeting Paolo Nespoli 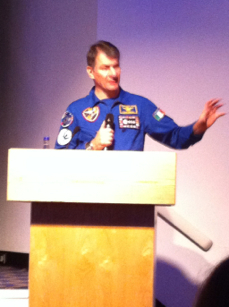 On Friday afternoon, I was scanning my Twitter feeds and saw a tweet from @spacekate. Kate said that on Saturday afternoon, ESA astronaut Paolo Nespoli would be in London, giving a talk at the Royal Aeronautical Society about his flights on the ISS. Kate also said that there were tickets still available and that better still, they were free!

Somewhat unusually, the calendar was co-operative and I was able to book tickets for myself and the boys (Julie was going to a series of talks in Oxford).

When we arrived, we were told that Paolo was running late. Somehow you expect an astronaut to arrive in a fast car. In fact poor Paolo had come by coach, which had been delayed by a cycle race! Whilst Paolo was waiting for his laptop and talk to catch up with him, he was happy to take questions, so I was really excited to be able to ask him about his visual memories of the trip.

The talk was fascinating. Even a 15 year old pronounced it ‘cool’. High praise indeed. But it was. Amazing to learn about some of the effects of zero gravity on the human body from someone who has actually experienced it – and what being launched in a Soyuz feels like (gentler than the shuttle, although the Soyuz ‘rides harder’ further into the flight).

Predictably, Paolo’s photos were stunning, no surprise to those of us who followed his tweets from space and his Flickr stream. A slide which caused much laughter was a shot of Italy from space – being noticeably brighter than its’ neighbours. Especially when Paolo explained that Italy imports a large quantity of its’ electricity.

One of Paolo’s slides featured a shot of one of the two amateur stations on the ISS. He explained that he and Cady Coleman had 77 contacts with schools during their flight – a record that he was proud of. To an audience which included school children and teachers, he encouraged schools who were interested in having a radio contact with the ISS to get in touch with the project.

All too soon, the presentation was over, but as Paolo was dashing out the door, I had the opportunity to thank him for his amateur activity from the Space Station and have a quick chat.

I never expected that I would shake the hand of an astronaut!

One Response to “I never expected I would shake the hand of an astronaut: Meeting Paolo Nespoli”